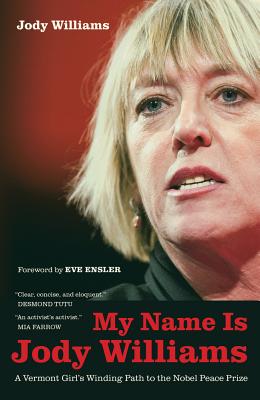 My Name Is Jody Williams

As Eve Ensler says in her inspired foreword to this book, “Jody Williams is many things—a simple girl from Vermont, a sister of a disabled brother, a loving wife, an intense character full of fury and mischief, a great strategist, an excellent organizer, a brave and relentless advocate, and a Nobel Peace Prize winner. But to me Jody Williams is, first and foremost, an activist.”

From her modest beginnings to becoming the tenth woman—and third American woman—to receive the Nobel Peace Prize, Jody Williams takes the reader through the ups and downs of her tumultuous and remarkable life. In a voice that is at once candid, straightforward, and intimate, Williams describes her Catholic roots, her first step on a long road to standing up to bullies with the defense of her deaf brother Stephen, her transformation from good girl to college hippie at the University of Vermont, and her protest of the war in Vietnam. She relates how, in 1981, she began her lifelong dedication to global activism as she battled to stop the U.S.-backed war in El Salvador.

Throughout the memoir, Williams underlines her belief that an “average woman”—through perseverance, courage and imagination—can make something extraordinary happen. She tells how, when asked if she’d start a campaign to ban and clear anti-personnel mines, she took up the challenge, and the International Campaign to Ban Landmines (ICBL) was born. Her engrossing account of the genesis and evolution of the campaign, culminating in 1997 with the Nobel Peace Prize, vividly demonstrates how one woman’s commitment to freedom, self-determination, and human rights can have a profound impact on people all over the globe.

Praise For My Name Is Jody Williams: A Vermont Girl's Winding Path to the Nobel Peace Prize (California Series in Public Anthropology #25)…

"Williams' incredibly honest first-person account of family, love, trauma, horror, and the balance of tedium and reward while working for human security is a wonderful testament to the power of one for the benefit of many. Also a poet, her writing is simple, rich with critical information, and profound – seemingly representative of the author herself: down-to-earth and straight to business, but containing an incomparably contagious spark. She's funny, too. You simply cannot finish reading this book without feeling the stir to help, whatever your cause may be."
— The Austin Chronicle

Jody Williams, who received the 1997 Nobel Peace Prize for her work to ban landmines, is founding chair of the Nobel Women’s Initiative, launched in January 2006. She is the recipient of fifteen honorary degrees, and in 2004 Forbes magazine named her one of the hundred most powerful women in the world in its first such list. Since 1998 she has served as a Campaign Ambassador for the International Campaign to Ban Landmines, which she helped found in 1992. Williams holds the Sam and Cele Keeper Endowed Professorship in Peace and Social Justice at the Graduate College of Social Work at the University of Houston. In 2012–13, she became the inaugural Jane Addams Distinguished Visiting Fellow in Social Justice at the University of Illinois at Chicago.
Loading...
or support indie stores by buying on