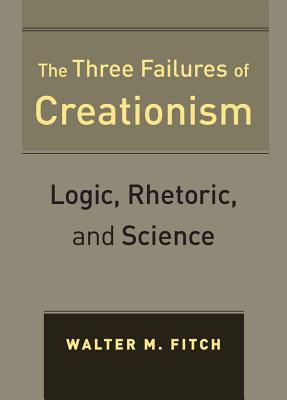 The Three Failures of Creationism

Walter M. Fitch, a pioneer in the study of molecular evolution, has written this cogent overview of why creationism fails with respect to all the fundamentals of scientific inquiry. He explains the basics of logic and rhetoric at the heart of scientific thinking, shows what a logical syllogism is, and tells how one can detect that an argument is logically fallacious, and therefore invalid, or even duplicitous. Fitch takes his readers through the arguments used by creationists to question the science of evolution. He clearly delineates the fallacies in logic that characterize creationist thinking, and explores the basic statistics that creationists tend to ignore, including elementary genetics, the age of the Earth, and fossil dating. His book gives readers the tools they need for detecting and disassembling the ideas most frequently repeated by creationists.

Praise For The Three Failures of Creationism: Logic, Rhetoric, and Science…

“Fascinating. . . . A primer for honing reasoning skills and using logic along with informed knowledge to offset specious and bombastic disputes.”
— Rita Hoots

Walter M. Fitch (1929–2011) was Professor of Ecology and Evolutionary Biology at the University of California, Irvine. He was a member of the National Academy of Sciences, member of the Human Genome Organization, and the author of more than 200 publications in molecular evolution. His previous books are Tempo and Mode in Evolution: Genetics and Paleontology Fifty Years after Simpson and Variation and Evolution in Plants and Microorganisms: Toward a New Synthesis Fifty Years after Stebbins.
Loading...
or support indie stores by buying on