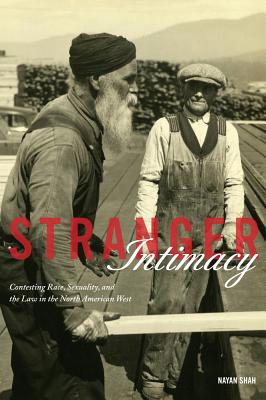 Contesting Race, Sexuality and the Law in the North American West (American Crossroads #31)

In exploring an array of intimacies between global migrants Nayan Shah illuminates a stunning, transient world of heterogeneous social relations—dignified, collaborative, and illicit. At the same time he demonstrates how the United States and Canada, in collusion with each other, actively sought to exclude and dispossess nonwhite races. Stranger Intimacy reveals the intersections between capitalism, the state's treatment of immigrants, sexual citizenship, and racism in the first half of the twentieth century.

“Shah’s brilliant and far-reaching second book offers a fresh take on intimacy and everyday life for migrants in cities and rural areas in the United States and Canada before the mid-twentieth century. . . . Shah makes a key contribution to literature on cross-racial intimacy and transnational queer studies, joining two growing scholarly fields that generally have remained separate. The book’s lucid prose, vivid stories, and gripping analysis make it a great read for both academic and general audiences interested in migration, intimacy, and the West.”
— H-Net

“Makes a significant contribution to historical scholarship. . . . But Shah realizes a broader objective, to show how the history of even a small (in numerical terms) minority has important implications for the ways in which all Americans understand the parameters of citizenship.”
— Southern California Quarterly

“Shah convincingly illuminates the intersection of seemingly separate bodies of law regulating citizenship, on the one hand, and intimacy, on the other. . . . An important contribution to the forging of a more complete and inclusive history of the North American West.”
— Journal of American History

"The book covers a multitude of fascinating cases that provide insight into the construction of intimacies between South Asian male transient migrants and white, African American, and Latino men and women."
— American Studies Journal

Nayan Shah is Professor and Chair of the Department of American Studies and Ethnicity at the University of Southern California and the author of Contagious Divides: Epidemics and Race in San Francisco's Chinatown (UC Press).
Loading...
or support indie stores by buying on