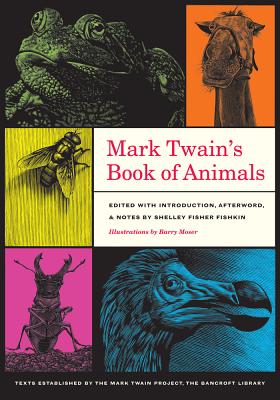 Longtime admirers of Mark Twain are aware of how integral animals were to his work as a writer, from his first stories through his final years, including many pieces that were left unpublished at his death. This beautiful volume, illustrated with 30 new images by master engraver Barry Moser, gathers writings from the full span of Mark Twain’s career and elucidates his special attachment to and regard for animals. What may surprise even longtime readers and fans is that Twain was an early and ardent animal welfare advocate, the most prominent American of his day to take up that cause. Edited and selected by Shelley Fisher Fishkin, who has also supplied an introduction and afterword, Mark Twain’s Book of Animals includes stories that are familiar along with those that are appearing in print for the first time.

Shelley Fisher Fishkin is Joseph S. Atha Professor of Humanities, Professor of English and Director of American Studies at Stanford University. She is the author of many books, including Lighting Out for the Territory: Reflections on Mark Twain and American Culture and Was Huck Black? Mark Twain and African-American Voices. She edited Is He Dead?, a new play by Mark Twain, and is also the editor of the 29-volume Oxford Mark Twain. Barry Moser is one of America's foremost wood engravers and is the proprietor of the Pennyroyal Press. Among the books he has illustrated are Alice's Adventures in Wonderland, The Adventures of Huckleberry Finn, and Moby Dick, or The Whale, all from UC Press. The Mark Twain Project is housed within the Mark Twain Papers, the world's largest archive of primary materials by this major American writer.

“An unfamiliar facet of a literary giant. . . . Succinctly represents Twain's admiration for the animal kingdom and relentless optimism in the face of human inadequacies.”
— Publishers Weekly

“A work that can easily be enjoyed by the casual reader of Twain and certainly qualifies as an essential volume for the devoted Twain scholar.”
— Martin Zehr

“This collection is as entertaining, visceral, sardonic and chastising as any of his [Twain’s] major works.”
— Martin Zehr

“Enjoy the tongue-twisting discourse Twain engages in with his two daughters about cats and much more.”
— Cat Fancy

“Brings together full stories, sketches, and brief passages that demonstrate Twain’s unique voice, skill as a writer, compassion, and humor. The engravings bring home the directness to Twain’s prose and add a special sense of wonder to this charming yet sobering book.”
— R.k Dickson
or
Not Currently Available for Direct Purchase
Copyright © 2020 American Booksellers Association