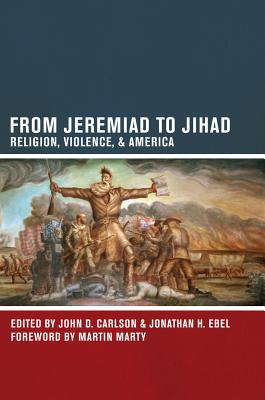 From Jeremiad to Jihad

Violence has been a central feature of America’s history, culture, and place in the world. It has taken many forms: from state-sponsored uses of force such as war or law enforcement, to revolution, secession, terrorism and other actions with important political and cultural implications. Religion also holds a crucial place in the American experience of violence, particularly for those who have found order and meaning in their worlds through religious texts, symbols, rituals, and ideas. Yet too often the religious dimensions of violence, especially in the American context, are ignored or overstated—in either case, poorly understood. From Jeremiad to Jihad: Religion, Violence, and America corrects these misunderstandings. Charting and interpreting the tendrils of religion and violence, this book reveals how formative moments of their intersection in American history have influenced the ideas, institutions, and identities associated with the United States. Religion and violence provide crucial yet underutilized lenses for seeing America anew—including its outlook on, and relation to, the world.

Praise For From Jeremiad to Jihad: Religion, Violence, and America…

"Offers an interdisciplinary focus that sets it apart from other texts."
— Jeffrey Williams

Jon Ebel is Assistant Professor of Religious Studies at the University of Illinois, Urbana-Champaign