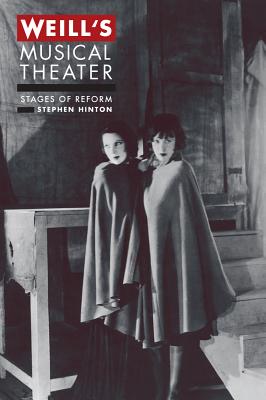 In the first musicological study of Kurt Weill’s complete stage works, Stephen Hinton charts the full range of theatrical achievements by one of twentieth-century musical theater’s key figures. Hinton shows how Weill’s experiments with a range of genres—from one-act operas and plays with music to Broadway musicals and film-opera—became an indispensable part of the reforms he promoted during his brief but intense career. Confronting the divisive notion of “two Weills”—one European, the other American—Hinton adopts a broad and inclusive perspective, establishing criteria that allow aspects of continuity to emerge, particularly in matters of dramaturgy. Tracing his extraordinary journey as a composer, the book shows how Weill’s artistic ambitions led to his working with a remarkably heterogeneous collection of authors, such as Georg Kaiser, Bertolt Brecht, Moss Hart, Alan Jay Lerner, and Maxwell Anderson.

“Eminently readable, with or without his music playing in the background. Professor Hinton is a fine writer who conveys what he knows and feels in terms insightful, intuitive and nuanced, yet accessible to those of us who are musically marginalized.”
— Washington Ind Rev Of Bks

"This is essential reading not only for Weill scholars but also those interested in twentieth-century opera and the history of the American musical. . . . Its achievement will not soon be surpassed."
— Journal of the American Musicological Society

"A majestic study."
— Journal of the Society for American Music

"Meticulously reasearched and offering abundant references . . . By carefully documenting the continuity of the experiments that Weill carried out in his musical theatre in Europe and the United States, this book succeeds in assessing the work of one of the key reformers of twentieth-century musical theatre."
— Journal of Theater Research International

Stephen Hinton is Avalon Foundation Professor in the Humanities at Stanford University. His publications include Kurt Weill: The Threepenny Opera.