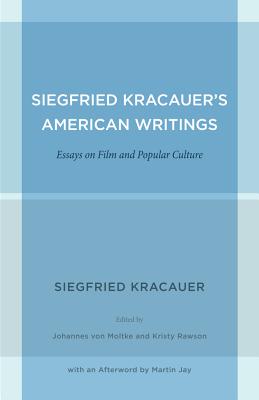 Siegfried Kracauer (1889–1966), friend and colleague of Walter Benjamin and Theodor Adorno, was one of the most influential film critics of the mid-twentieth century. In this book, Johannes von Moltke and Kristy Rawson have, for the first time assembled essays in cultural criticism, film, literature, and media theory that Kracauer wrote during the quarter century he spent in America after fleeing Nazi-occupied Europe. In the decades following his arrival in the United States, Kracauer commented on developments in American and European cinema, wrote on film noir and neorealism, examined unsettling political trends in mainstream cinema, and reviewed the contemporary experiments of avant-garde filmmakers. As a cultural critic, he also ranged far beyond cinema, intervening in debates regarding Jewish culture, unraveling national and racial stereotypes, and reflecting on the state of arts and humanities in the 1950s. These essays, together with the editors' introductions and an afterward by Martin Jay offer illuminating insights into the films and culture of the postwar years and provide a unique perspective on this eminent émigré intellectual.

Siegfried Kracauer (1889-1966) was a member of the Frankfurt School, and is considered one of the great film critics of the 20th century.

Johannes von Moltke is Associate Professor of German Studies and Screen Arts and Cultures at the University of Michigan, author of No Place Like Home: Locations of Heimat in German Cinema, (UC Press).

Kristy Rawson is a graduate student in Screen Arts & Cultures at Michigan.

“There is an urgency in these pieces to convey exactly how powerful what he called “those movies with a message” could be.”
— Los Angeles Review Of Books

“American Writings shows that Kracauer was . . . a cultural critic keenly attuned to the interplay of culture and politics as they collided on the cinema screen.”
— Times Literary Supplement (TLS)

“This edition is quite informative. . . . [The editors’ input] smoothly guides through the many facets of this important character.”
— Alexander Ebert
or support indie stores by buying on
Copyright © 2020 American Booksellers Association