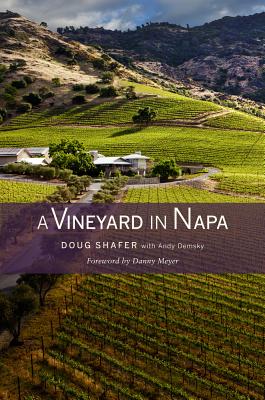 A Vineyard in Napa

At the age of 47, when he a successful publishing executive and living with his wife and four children in an affluent Chicago suburb, John Shafer made the surprise announcement that he had purchased a vineyard in the Napa Valley. In 1973, he moved his family to California and, with no knowledge of winemaking, began the journey that would lead him, thirty years later, to own and operate what distinguished wine critic Robert M. Parker, Jr. called “one of the world’s greatest wineries.” This book, narrated by Shafer’s son Doug, is a personal account of how his father turned his midlife dream into a remarkable success story.

Set against the backdrop of Napa Valley’s transformation from a rural backwater in the 1970s through its emergence today as one of the top wine regions in the world, the book begins with the winery’s shaky start and takes the reader through the father and son’s ongoing battles against killer bugs, cellar disasters, local politics, changing consumer tastes, and the volatility of nature itself. Doug Shafer tells the story of his own education, as well as Shafer Vineyards’ innovative efforts to be environmentally sustainable, its role in spearheading the designation of a Stags Leap American Viticultural Area, and how the wine industry has changed in the contemporary era of custom-crushing and hobbyist winery investors.


Praise For A Vineyard in Napa…

“This is also the story of the people who came to Napa Valley in the 1970s from many different walks of life, how they and a young industry came of age, overcoming disappointment, avoiding making the same mistakes twice, and facing realities - both economic and environmental - that are humbling and sobering.”
— Wine Spectator

Doug Shafer is President of Shafer Vineyards. He and his father were winners of the 2010 James Beard Foundation Award for “Outstanding Wine and Spirits Professional.”
Andy Demsky is a Napa Valley–based writer and PR consultant.
Loading...
or
Not Currently Available for Direct Purchase