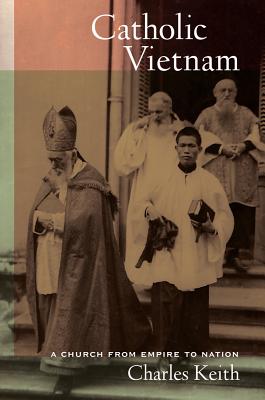 A Church from Empire to Nation (From Indochina to Vietnam: Revolution and War in a Global Perspective #5)

In this important new study, Charles Keith explores the complex position of the Catholic Church in modern Vietnamese history. By demonstrating how French colonial rule allowed for the transformation of Catholic missions in Vietnam into broad and powerful economic and institutional structures, Keith discovers the ways race defined ecclesiastical and cultural prestige and control of resources and institutional authority. This, along with colonial rule itself, created a culture of religious life in which relationships between Vietnamese Catholics and European missionaries were less equal and more fractious than ever before. However, the colonial era also brought unprecedented ties between Vietnam and the transnational institutions and culture of global Catholicism, as Vatican reforms to create an independent national Church helped Vietnamese Catholics to reimagine and redefine their relationships to both missionary Catholicism and to colonial rule itself. Much like the myriad revolutionary ideologies and struggles in the name of the Vietnamese nation, this revolution in Vietnamese Catholic life was ultimately ambiguous, even contradictory: it established the foundations for an independent national Church, but it also polarized the place of the new Church in post-colonial Vietnamese politics and society and produced deep divisions between Vietnamese Catholics themselves.

Praise For Catholic Vietnam: A Church from Empire to Nation (From Indochina to Vietnam: Revolution and War in a Global Perspective #5)…

"An excellent book. The research is based on a solid command of the archival sources; it is well argued and loaded with insightful details."
— Patricia M. Pelley

"[Catholic Vietnam] adds a sophisticated voice to debates about the role of religion in the imperial project, giving an in-depth exploration of relations between government and church officials on the ground and demonstrating that religious, secular, imperial, and national discourses were co-constitutive."
— Contemporary French Civilization

"Catholic Vietnam . . . is an articulate and thoughtful re-evaluation of the Church as a national institution and as a factor in Vietnam's path towards independence."
— Shane Strate

Charles Keith is Assistant Professor of History at Michigan State University.
Loading...
or support indie stores by buying on