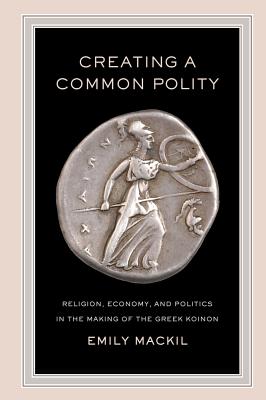 Religion, Economy, and Politics in the Making of the Greek Koinon (Hellenistic Culture and Society #55)

In the ancient Greece of Pericles and Plato, the polis, or city-state, reigned supreme, but by the time of Alexander, nearly half of the mainland Greek city-states had surrendered part of their autonomy to join the larger political entities called koina. In the first book in fifty years to tackle the rise of these so-called Greek federal states, Emily Mackil charts a complex, fascinating map of how shared religious practices and long-standing economic interactions faciliated political cooperation and the emergence of a new kind of state. Mackil provides a detailed historical narrative spanning five centuries to contextualize her analyses, which focus on the three best-attested areas of mainland Greece—Boiotia, Achaia, and Aitolia. The analysis is supported by a dossier of Greek inscriptions, each text accompanied by an English translation and commentary.

Praise For Creating a Common Polity: Religion, Economy, and Politics in the Making of the Greek Koinon (Hellenistic Culture and Society #55)…

"Offers a wealth of useful, hardly accessible information and interesting insights into the workings of Greek federal states . . . recommended not only to classicists and ancient historians, but also to students of politics."
— Bryn Mawr Classical Review

"A model of what scholarship in ancient history should ideally be: technically impeccable, theoretically bold and imaginative, rigorously argued, and—not least—a pleasure for both experts and novices to read."
— Barbara Weiden Boyd, Chair

Emily Mackil is Associate Professor of History at the University of California, Berkeley.
Loading...
or support indie stores by buying on