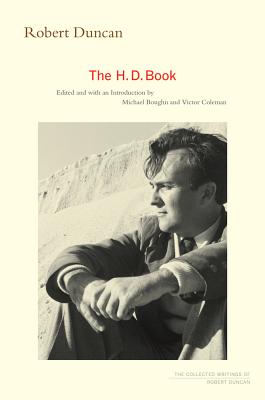 The H.D. Book (The Collected Writings of Robert Duncan #1)

This magisterial work, long awaited and long the subject of passionate speculation, is an unprecedented exploration of modern poetry and poetics by one of America’s most acclaimed and influential postwar poets. What began in 1959 as a simple homage to the modernist poet H.D. developed into an expansive and unique quest to arrive at a poetics that would fuel Duncan’s great work in the 1970s. A meditation on both the roots of modernism and its manifestation in the work of H.D., Ezra Pound, D.H. Lawrence, William Carlos Williams, Edith Sitwell, and many others, Duncan’s wide-ranging book is especially notable for its illumination of the role women played in creation of literary modernism. Until now, The H.D. Book existed only in mostly out-of-print little magazines in which its chapters first appeared. Now, for the first time published in its entirety, as its author intended, this monumental work—at once an encyclopedia of modernism, a reinterpretation of its key players and texts, and a record of Duncan’s quest toward a new poetics—is at last complete and available to a wide audience.

Praise For The H.D. Book (The Collected Writings of Robert Duncan #1)…

“Published as the first volume in California's Collected Writings of Robert Duncan series, this lovingly prepared volume presents this long critical work, written in 1960 and 1961, in its full form for the first time.”
— Publishers Weekly

“The guiding light throughout is Duncan’s clear, though subtly resonant prose, which lets even lengthy sentences carry the reader smoothly along from beginning to end.”
— Foreword Reviews

“I am besotted with a new book that is also an old book. This is The H.D. Book, by Robert Duncan, a wild, dazzling, idiosyncratic magnum opus. . . . The wonders of The H.D. Book are almost without number. [It is] a work of exacting and extravagant optimism.”
— Jed Perl

“Profoundly coherent: a strikingly original and provocative articulation of an American literary vision that is engaged simultaneously with Romantic enchantment, modernist formalism, and an arguably postmodern concern with citational networks, self-displacement, and the shadow play of a language always larger than us.”
— Bookforum

“Into this eldritch tapestry Duncan weaves patches of poetic autobiography, strands of family history and reflections on his intellectual development.”
— The Nation

“Robert Duncan’s The H.D. Book, complete in print at last, now manifests the timeliness of its permanence.”
— Jim Powell

“The belated publication of The H.D. Book will, one hopes, lead more readers to her haunting, resonant later work and also convince more readers to make the leap into Robert Duncan's demanding but gorgeous word-music. Someday, some century even, he and his peers in the Bay Area Renaissance . . . will be recognized as the greatest and most rewarding American poets of their era.”
— Greer Mansfield

Robert Duncan (1919–1988) was born in Oakland and spent most of his life in California. One of the major figures in the San Francisco Renaissance, Duncan, often identified with Donald Allen's landmark anthology The New American Poetry and the Black Mountain poets, is author of The Opening of the Field, Roots and Branches, and Bending the Bow, among other works.
Michael Boughn is a poet, scholar, and fiction writer. His many publications include H.D.: A Bibliography, 1905–1990, Dislocations in Crystal, Into the World of the Dead, and 22 Skidoo/SubTractions.
Victor Coleman was a founding editor of Coach House Press and is author of one / eye / love, Light Verse, and ICON TACT among many other books of poetry.