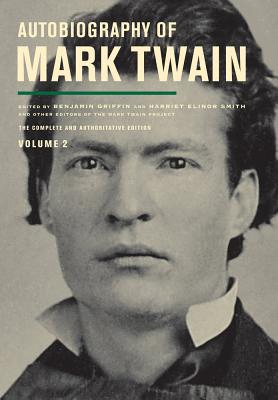 Mark Twain’s complete, uncensored Autobiography was an instant bestseller when the first volume was published in 2010, on the centennial of the author’s death, as he requested. Published to rave reviews, the Autobiography was hailed as the capstone of Twain’s career. It captures his authentic and unsuppressed voice, speaking clearly from the grave and brimming with humor, ideas, and opinions.

The eagerly-awaited Volume 2 delves deeper into Mark Twain’s life, uncovering the many roles he played in his private and public worlds. Filled with his characteristic blend of humor and ire, the narrative ranges effortlessly across the contemporary scene. He shares his views on writing and speaking, his preoccupation with money, and his contempt for the politics and politicians of his day. Affectionate and scathing by turns, his intractable curiosity and candor are everywhere on view.

"Twain is incapable of going more than a few paragraphs without making you laugh or think hard. . . . Don't loan this book out: you'll never see it again."
— Bloomberg Pursuits

"Another delightful round of humor and candor, reminiscence and insider sketches of the people and politics of Twain’s day."
— The Sacramento Bee

"Contains more of Twain’s ranging, astute, and unfailingly candid portrayals of his private and public lives. Excoriations of politicians appear next to affectionate family stories and bemused observations on the absurdities of life, helping to fill out our understanding of America’s greatest humorist."
— The New Yorker, Page-Turner

"Set aside all ideas of starting at the beginning and reading through to the end. This is a book to keep on your bedside table, or in the kitchen, or the garage, or anyplace else you might want to pick it up. Follow Clemens' own advice in reading it, as he did in writing it: Start reading at no particular point; wander at your free will all over it; read only about the thing that interests you for the moment; drop it the moment its interest threatens to pale; and turn your eye upon the new and more interesting thing that has intruded itself into your gaze meantime. Believe me, there are plenty of these in this wonderful volume."
— The Hartford Courant

"One sees a mind bubbling and hears a uniquely American voice."
— Literary Review

"Twain traveled extensively and befriended many luminaries, and his colorful experiences give the book the same Dickensian scope as the first volume, and presents a vivid picture of America in the 19th century and Twain’s indelible mark on it."
— Publishers Weekly

"This is vintage Twain—timeless, and still germane."
— BookPage

"Twain is frequently sad and cynical in these late-in-life writings (just a few years before his death) but his devastating wit and sharp-eyed commentary are on full display as well."
— Christian Science Monitor

"The publishing sensation of the year."
— Jonah Raskin

"What we’ve inherited is no ordinary book. You may begin at the beginning and read to its end; you may reach into it like a grab bag and enjoy whatever you pull out. It doesn’t matter."
— Dallas Morning News

"Twain ambles through eternal truths and trivia, telling of world events and personal piques. Witticisms appear at random intervals, and the ensuing laughter can be dangerous to the lower extremities if one doesn’t have a vicelike grip on this weighty tome."
— The Christian Science Monitor

"In case you had any doubt about it, the new book demonstrates that Twain dictated as well as he wrote."
— The Washington Post

"One of the more marvelous literary projects of our time."

"As much a sensitive and articulate historical work as an autobiography, the book is almost inexhaustible in its content. . . . What seems like a mountain of anecdotal scraps and opinions results in a clear picture of Clemens as Twain."
— Library Journal

"If you surrender yourself to the sound of his voice, the pleasure of Twain’s company proves pretty hard to resist. His narrative may be loose, but at least it never loses sight of its subject."
— The New Yorker, Page-Turner

"Because this edition of The Autobiography of Mark Twain is rich and open-ended even as it provides a text built with incredible insight and care, it is likely, indeed, to live up to its billing as the "Complete and Authoritative Edition.""
— Resources for American Literary Study

Benjamin Griffin and Harriet Elinor Smith are editors at the Mark Twain Project, which is housed within the Mark Twain Papers, the world’s largest archive of primary materials by this major American writer. Under the direction of General Editor Robert H. Hirst, the Project’s editors are producing the first comprehensive edition of all of Mark Twain’s writings.
Loading...
or support indie stores by buying on