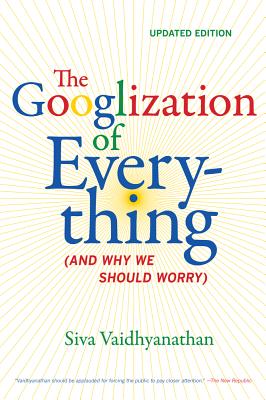 The Googlization of Everything

(And Why We Should Worry)

In the beginning, the World Wide Web was exciting and open to the point of anarchy, a vast and intimidating repository of unindexed confusion. Into this creative chaos came Google with its dazzling mission—“To organize the world’s information and make it universally accessible”—and its much-quoted motto, “Don’t be evil.” In this provocative book, Siva Vaidhyanathan examines the ways we have used and embraced Google—and the growing resistance to its expansion across the globe. He exposes the dark side of our Google fantasies, raising red flags about issues of intellectual property and the much-touted Google Book Search. He assesses Google’s global impact, particularly in China, and explains the insidious effect of Googlization on the way we think. Finally, Vaidhyanathan proposes the construction of an Internet ecosystem designed to benefit the whole world and keep one brilliant and powerful company from falling into the “evil” it pledged to avoid.

Praise For The Googlization of Everything: (And Why We Should Worry)…

“An important book. While a number of excellent histories about the emergence of Google have been published . . . few writers have tried to take a comprehensive and critical look at the wider impact on society of Google's vast ambition ‘to organize the world's information and make it universally accessible and useful.’. . . Vaidhyanathan's perspective as an East Coast academic outside the group-think of Silicon Valley is a valuable one. He is a clear writer with an engaging voice, and a good guide for this peek behind the wizard's curtain.”
— San Jose Mercury News

“Among the virtues of The Googlization of Everything is Vaidhyanathan's decision to go beyond the typical boundaries of books on Google, which tend to focus on the American market and, for a chapter or two, China. Vaidhyanathan's book may not strictly include ‘everything,’ but it at least encompasses much of the more wired world. . . . Vaidhyanathan should be thanked for reminding us that we can't let Google get too big to fail.”
— Bookforum

“. . . Vaidhyanathan thoughtfully examines the insidious influence of Google on our society. . . . He reminds us that Google is a publicly traded, revenue-driven firm that is dangerous in many subtle ways. By valuing popularity over accuracy and established sites over new ones, Google sets its own agenda regarding what information is most relevant to users, altering their perceptions about value and significance. Vaidhyanathan admirably concludes with a design for an information ecosystem called the Human Knowledge Project, which would be a more democratic means of parsing and organizing knowledge.”
— Publishers Weekly

“To Vaidhyanathan, the towering popularity of Google makes it a troubling entity. The purpose of his book is to lay out where the problems, potential and actual, lie. He knows, however, that Google provides people at work and at play with too many handy and helpful and profitable benefits for the deeper concerns to penetrate. But to people worried about one organization garnering so much of the world’s activity online, about a business that makes ever more money by collecting more and more information about users, about the sum of human knowledge sitting so much in the hands of one firm . . . The Googlization of Everything is a dystopic vision.”
— Chronicle of Higher Education

“A stimulating and controversial book. Its subtitle is And Why We Should Worry - and what I didn't worry about made me think and argue. What is going on is fascinating, and as he makes clear, what could be going on if these tools and resources get into the metaphorical wrong hands is alarming.”
— Times Higher Education

“This book is in no way an attack on Google but more like a parent asking a child, ‘What do you want to do with your life?’ then going through all the concerns one by one. Strongly recommended.”
— Library Journal

“[An] intriguing exposé of the popular website. . . . The author unmasks the monster behind the friendly interface with the suspense of a horror novel. An urgent reminder to look more closely at dangers that lurk in plain sight.”
— Kirkus Reviews

“Readers might detect a whiff of paranoia in The Googlization of Everything, but that doesn’t mean there isn’t merit in the author’s musings. Remember the Trojan Horse.”
— Foreword Reviews

“Note first that Vaidhyanathan has not written a diatribe against Google itself, a company he admires for many reasons despite also having questions about it. Instead the book is about "googlization," that is, the development of reliance by internet users on major search service providers—Google being the most major—who, because of their control of the process, have an influence over information that could be distorting or even, potentially and if it fell into the wrong hands, malign.”
— Businessspectator.com

Siva Vaidhyanathan is the Robertson Family Professor of Media Studies and Law and Chair of the Department of Media Studies at the University of Virginia, and the author of Copyrights and Copywrongs: The Rise of Intellectual Property and How It Threatens Creativity and The Anarchist in the Library: How the Clash between Freedom and Control Is Hacking the Real World and Crashing the System.
Loading...
or support indie stores by buying on