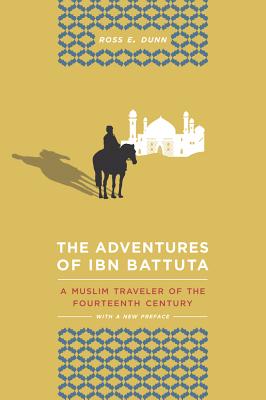 The Adventures of Ibn Battuta (Paperback)

A Muslim Traveler of the Fourteenth Century, With a New Preface

Ross Dunn here recounts the great traveler's remarkable career, interpreting it within the cultural and social context of Islamic society and giving the reader both a biography of an extraordinary personality and a study of the hemispheric dimensions of human interchange in medieval times.

Praise For The Adventures of Ibn Battuta: A Muslim Traveler of the Fourteenth Century, With a New Preface…

"In 1325, at the age of twenty-one, Ibn Battuta set off from his native Tangier on the hajj to Mecca. He did not return to Morocco until 1349, by which time he had visited not only Mecca, but also Egypt, Syria, Persia, Iraq, East Africa, the Yemen, Anatolia, the steppelands of southern Russia, Constantinople, India, the Maldives, Sumatra, and China. . . . An excellent synoptic introduction to the Muslim world in the Middle Ages."
— Times Literary Supplement

"Dunn has produced an attractive, intelligent, and useful book, and one that is a pleasure to read."
— International History Review

"Dunn has succeeded splendidly in his aim of bringing the Moroccan judge alive for a general audience and of presenting an analysis of his travels which is both descriptive and critical."
— Journal of Islamic Studies

"Written in an engaging style that should easily appeal to the non-historian, this book is very probably unprecedented in concept and execution––placing it in a class apart and above the majority of books from Western scholars that deal with Islamic subjects."
— Journal of the Royal Asiatic Society

"A remarkable achievement: [Dunn's] book is more than he set out to write; it is not simply a retelling of the Ibn Battuta story for a general audience, as he rather modestly puts it, but an introduction to the Islamic world in particular, and the late medieval world in general."
— British Society for Middle Eastern Studies Bulletin

"Professor Dunn's book is based on Ibn Battuta's own writings. . . . and provides a commentary on the society and places which he visited, making admirable use of the great increase of our knowledge over the last generation. The result is fascinating."
— Asian Affairs
or support indie stores by buying on
Copyright © 2020 American Booksellers Association