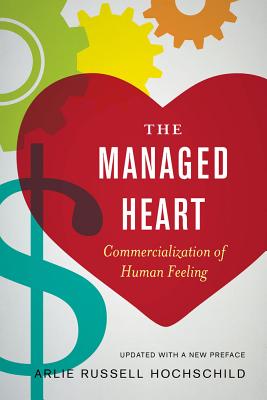 In private life, we try to induce or suppress love, envy, and anger through deep acting or "emotion work," just as we manage our outer expressions of feeling through surface acting. In trying to bridge a gap between what we feel and what we "ought" to feel, we take guidance from "feeling rules" about what is owing to others in a given situation. Based on our private mutual understandings of feeling rules, we make a "gift exchange" of acts of emotion management. We bow to each other not simply from the waist, but from the heart.

But what occurs when emotion work, feeling rules, and the gift of exchange are introduced into the public world of work? In search of the answer, Arlie Russell Hochschild closely examines two groups of public-contact workers: flight attendants and bill collectors. The flight attendant’s job is to deliver a service and create further demand for it, to enhance the status of the customer and be "nicer than natural." The bill collector’s job is to collect on the service, and if necessary, to deflate the status of the customer by being "nastier than natural." Between these extremes, roughly one-third of American men and one-half of American women hold jobs that call for substantial emotional labor. In many of these jobs, they are trained to accept feeling rules and techniques of emotion management that serve the company’s commercial purpose.

Just as we have seldom recognized or understood emotional labor, we have not appreciated its cost to those who do it for a living. Like a physical laborer who becomes estranged from what he or she makes, an emotional laborer, such as a flight attendant, can become estranged not only from her own expressions of feeling (her smile is not "her" smile), but also from what she actually feels (her managed friendliness). This estrangement, though a valuable defense against stress, is also an important occupational hazard, because it is through our feelings that we are connected with those around us.

On the basis of this book, Hochschild was featured in Key Sociological Thinkers, edited by Rob Stones. This book was also the winner of the Charles Cooley Award in 1983, awarded by the American Sociological Association and received an honorable mention for the C. Wright Mills Award.

Praise For The Managed Heart: Commercialization of Human Feeling…

"'The Managed Heart' is written so accessibly that it appeals to both the academic and the general reader. It is best when it delineates how and why we manage our emotions according to our gender or social class."
— New York Times

"[The] book is topically informative, critical of capitalism in a fresh way, and illuminating on the gender issue in emotions."
— American Journal of Sociology

"This is a finely crafted study of the work and inner lives of airline flight attendants. . . . strongly recommend[ed] to everyone, not just to specialists on emotions."
— Contemporary Sociology

"This is an important work. It is an interesting and provocative introduction to a crucial topi that deserves further research and thought."
— Academy of Management Review

"Hochschild's work is significant for its illumination of new, disturbing, and everyday alienations of consciousness and feeling. Among other things, her line of inquiry suggests a new understanding of the social construction of gender and its relation to capitalism and power."
— Signs

"On the whole, this is a superb book. Hochschild has tackled a heretofore largely ignored dimension of human social existence."
— Social Forces

"The Managed Heart 's impact was—and still is—profound. It has probably done more than any other single publication to ignite and shape the exponential growth of the sociology of emotions—especially emotion is organisations."
— Culture and Organization

"Hochschild [has] developed a language to identify how both feeling and time are transformed into commodities to be used in the service of capital."
— Theory & Event

Arlie Russell Hochschild is a Professor of Sociology at the University of California, Berkeley. She is the author of three New York Times Book Review Notable Books of the Year, including The Second Shift, The Managed Heart, and The Time Bind. She has received numerous awards and grants ranging from Fulbright and Guggenheim Fellowships to a three-year research grant from the National Institute of Public Health. Her articles have appeared in Harper’s, Mother Jones, and The New York Times Magazine, among others. She lives in San Francisco with her husband, the writer Adam Hochschild; they have two sons
Loading...
or support indie stores by buying on