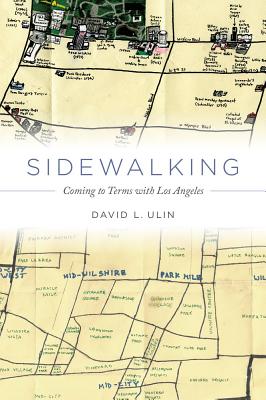 In Sidewalking, David L. Ulin offers a compelling inquiry into the evolving landscape of Los Angeles. Part personal narrative, part investigation of the city as both idea and environment, Sidewalking is many things: a discussion of Los Angeles as urban space, a history of the city’s built environment, a meditation on the author’s relationship to the city, and a rumination on the art of urban walking. Exploring Los Angeles through the soles of his feet, Ulin gets at the experience of its street life, drawing from urban theory, pop culture, and literature. For readers interested in the culture of Los Angeles, this book offers a pointed look beneath the surface in order to see, and engage with, the city on its own terms.

Praise For Sidewalking: Coming to Terms with Los Angeles…

"In this brief but engaging book, the author chronicles his wanderings through the streets and his conversations with friends, entrepreneurs, and officials, and he makes it clear that he has read every book and seen every movie on his subject. Those who know the city will have the advantage, but Ulin casts his net widely, so most readers will enjoy his observations of Los Angeles in literary and popular art as well as his thoughtful personal views."
— Kirkus

"In Sidewalking, Los Angeles Times book critic David L. Ulin wanders L.A.—along Wilshire, around Bunker Hill, through the Grove—and as he does, he ponders the city’s fading past and emerging future. A self-described 'reluctant Angeleno,' Ulin, who moved here from New York in 1991, brings a sharp eye, a good pair of legs, and a sensitive thoughtfulness to the subject of urban sprawl. Ulin’s musings are immediately relevant, covering everything from the Metro Purple Line extension to Rick Caruso’s proposed downtown trolley to Councilman Jose Huizar’s Bringing Back Broadway campaign."
— Los Angeles Magazine

"The moments of true beauty in this shortest of books are precisely when Ulin reminds us that the everyday texture of Los Angeles . . . already functions like a quantum field out of which distant influences, disorienting urban rebirths and half-remembered cinematic cameos are constantly emerging. It is a city of 'seismic existentialism,' he wonderfully suggests, whose ground is shaken not just by earthquakes but by the seemingly endless eruption of alternative urban forms, often successfully breaking through."
— Geoff Manaugh

"Walking in Los Angeles is not an oxymoron. In this revealing meditation on what it means to pound the pavement in the City of Automobiles, book critic David L. Ulin observes a Los Angeles that many of us didn't even knew existed. . . . Thoughtful and poetic, Ulin's small volume proves there is more to the City of Angels than just beaches, movie stars and abundant sunshine."
— June Sawyers

"In a series of fascinating, at times impressionistic, disquisitions [Ulin] unlocks some of Los Angeles’s “hieroglyphic” secrets. Step right up then for Ulin’s tour of Los Angeles, a diffuse city full of 'nonlandmark landmarks.' . . . The pleasure of Sidewalking is watching Ulin contextualize each place by considering the way its history is preserved, effaced, or buried under the surface."

"David Ulin’s Sidewalking opens LA up for all of us—locals or not. A quietly stirring book, this should be on your must-read list. . . . I loved it and can’t wait to read it again and again."
— Anna March

"In Sidewalking, David Ulin brilliantly reflects on the city as experienced by someone with a need to walk, a need to savor streetscapes, registering signage, vistas, vegetation, fellow citizens. And while Ulin walks, he thinks: processing traces of history, architectural styles, street plans, demographics, changes. A longtime L.A. Times book critic, Ulin, intimately familiar with the best that’s ever been written about this sprawling, layered city, also artfully folds in the perceptions of others. Memories, observations, bygone L.A., 21st-century L.A.—Ulin’s superlative tapestry makes this the latest of great literary takes on the City of Angels."
— Bookish

David L. Ulin is the author or editor of eight previous books, including The Lost Art of Reading: Why Books Matter in a Distracted Time and the Library of America’s Writing Los Angeles: A Literary Anthology, which won a California Book Award. A 2015 Guggenheim Fellow, he is book critic, and former book editor, of the Los Angeles Times.
Loading...
or support indie stores by buying on