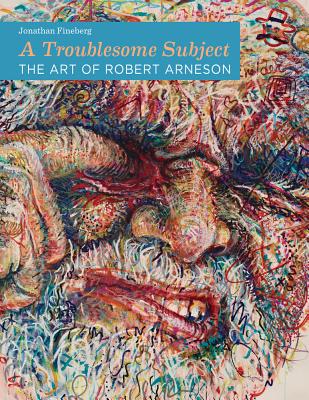 The Art of Robert Arneson

The first major book to consider the life and work of Robert Arneson, A Troublesome Subject tells the fascinating story of how a high school art teacher transformed himself into an artist of international stature and ambition. Representing the full scope of Arneson’s career in a rich survey of color reproductions, this book is at once a study of the trajectory of contemporary culture, the work of Robert Arneson, and the relationship between the two. It shows how Arneson’s work articulated the crisis of narcissism that has defined American culture since 1970. Jonathan Fineberg develops his ongoing work toward a psychosocial history of art as he proceeds through Arneson’s career—chronicling his early life, the formation of a personal style, and finding a unique subject matter in his famous post-1970 turn to self-portraiture.

Praise For A Troublesome Subject: The Art of Robert Arneson…

"[An] illuminating study. . . . Arneson drew continually from his personal reservoir of untamed comedy to create works that resolutely crude."
— ARTnews

"A long-awaited and in-depth monograph of the life and work of Robert Arneson, an artist who has infused the alchemy of clay with the funk aesthetic of everyday objects and self-portraiture, in ways that elevate their sustaining power through his insightful social and political observations." Ten Best Art Books of 2013.
— The Brooklyn Rail

"Distinguished art historian and critic Jonathan Fineberg excels at chronicling the psychosocial intersection between contemporary art and artists, and the evolving fabric of American values."
— THE magazine

“Artist relishing his role as troublemaker: The piece had to go, it was explained to Arneson, because the vice president of Kaiser Industries saw it and said, ‘Goddamn, no f- artist is going to attack American capitalism in this manner.' The piece was eventually bought by an Arneson student and collector, whose husband hated it so much that she later said that conflict over it had contributed to her divorce.”
— San Francisco Chronicle

Jonathan Fineberg is Edward William and Jane Marr Gutgsell Professor of Art History Emeritus at the University of Illinois, Urbana-Champaign. He is the author of The Innocent Eye: Children's Art and The Modern Artist, Art since 1940, and Imagining America: Icons of 20th Century American Art. He is the editor of When We Were Young: New Perspectives on the Art of the Child (UC Press).
or support indie stores by buying on