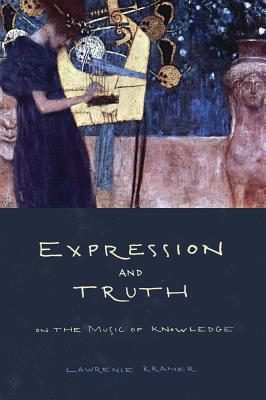 On the Music of Knowledge

Expression and truth are traditional opposites in Western thought: expression supposedly refers to states of mind, truth to states of affairs. Expression and Truth rejects this opposition and proposes fluid new models of expression, truth, and knowledge with broad application to the humanities. These models derive from five theses that connect expression to description, cognition, the presence and absence of speech, and the conjunction of address and reply. The theses are linked by a concentration on musical expression, regarded as the ideal case of expression in general, and by fresh readings of Ludwig Wittgenstein’s scattered but important remarks about music. The result is a new conception of expression as a primary means of knowing, acting on, and forming the world.

“Recent years have seen the return of the claim that music’s power resides in its ineffability. In Expression and Truth, Lawrence Kramer presents his most elaborate response to this claim. Drawing on philosophers such as Wittgenstein and on close analyses of nineteenth-century compositions, Kramer demonstrates how music operates as a medium for articulating cultural meanings and that music matters too profoundly to be cordoned off from the kinds of critical readings typically brought to the other arts. A tour-de-force by one of musicology’s most influential thinkers.”—Susan McClary, Desire and Pleasure in Seventeenth-Century Music.

Lawrence Kramer, is Distinguished Professor of English and Music at Fordham University. He is the author of many books, most recently, Musical Meaning: Toward a Critical History, Opera and Modern Culture, and Why Classical Music Still Matters.

Praise For Expression and Truth: On the Music of Knowledge…

“Challenges the reader to dig hard for a better understanding of the issues. . . . Highly recommended.”
— W. K. Kearns, Emeritus, University of Colorado at Boulder
or support indie stores by buying on
Copyright © 2020 American Booksellers Association