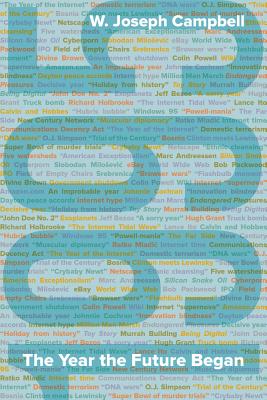 The Year the Future Began

A hinge moment in recent American history, 1995 was an exceptional year. Drawing on interviews, oral histories, memoirs, archival collections, and news reports, W. Joseph Campbell presents a vivid, detail-rich portrait of those memorable twelve months. This book offers fresh interpretations of the decisive moments of 1995, including the emergence of the Internet and the World Wide Web in mainstream American life; the bombing at Oklahoma City, the deadliest attack of domestic terrorism in U.S. history; the sensational “Trial of the Century,” at which O.J. Simpson faced charges of double murder; the U.S.-brokered negotiations at Dayton, Ohio, which ended the Bosnian War, Europe’s most vicious conflict since the Nazi era; and the first encounters at the White House between Bill Clinton and Monica Lewinsky, a liaison that culminated in a stunning scandal and the spectacle of the president’s impeachment and trial. As Campbell demonstrates in this absorbing chronicle, 1995 was a year of extraordinary events, a watershed at the turn of the millennium. The effects of that pivotal year reverberate still, marking the close of one century and the dawning of another.

W. Joseph Campbell is Professor in the School of Communication at American University. He is the author of five other nonfiction books, including Getting It Wrong: Ten of the Greatest Misreported Stories in American Journalism (UC Press, 2010).

"A worthy, informative, and sporting attempt to convince us that the world we live in was crucially shaped by things that happened in 1995. . . . Campbell’s book draws our attention to the nineteen-nineties. And he’s right when he points out that the decade is pretty much ignored."
— Louis Menand

"One of the country’s best media watchers has turned his attention to some major reporting debacles, missteps and missed opportunities which have had continuing repercussions over the past 20 years."
— Christopher Harper

"A remarkable book. . . . Campbell’s intense commitment to his material brings it to life. He’s a persuasive writer with an excellent sense of detail and a knack for narrative. Even those who clearly remember 1995, and know how major events turned out, will find his book illuminating."
— Robert Fulford

"An eventful year, 1995, and one instructive to look back upon."
— Brian Bethune

"Makes the case that 1995 was a watershed year."
— Brian Resnick