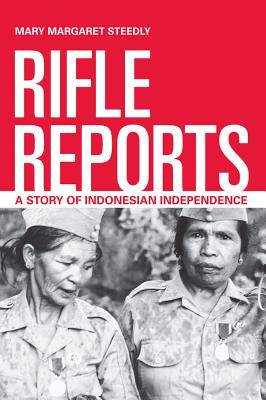 A Story of Indonesian Independence

On August 17, 1945, Indonesia proclaimed its independence from Dutch colonial rule. Five years later, the Republic of Indonesia was recognized as a unified, sovereign state. The period in between was a time of aspiration, mobilization, and violence, in which nationalists fought to expel the Dutch while also trying to come to grips with the meaning of “independence.” Rifle Reports is an ethnographic history of this extraordinary time as it was experienced on the outskirts of the nation among Karo Batak villagers in the rural highlands of North Sumatra. Based on extensive interviews and conversations with Karo veterans, Rifle Reports interweaves personal and family memories, songs and stories, memoirs and local histories, photographs and monuments, to trace the variously tangled and perhaps incompletely understood ways that Karo women and men contributed to the founding of the Indonesian nation. The routes they followed are divergent, difficult, sometimes wavering, and rarely obvious, but they are clearly marked with the signs of gender. This innovative historical study of nationalism and decolonization is an anthropological exploration of the gendering of wartime experience, as well as an inquiry into the work of storytelling as memory practice and ethnographic genre.

Praise For Rifle Reports: A Story of Indonesian Independence…

"Fascinating ... Mary Steedly moves away from the conventional narrative histories of the period, which have generally reflected the perspective of male revolutionaries and leaders, to a more deeply textured portrayal of the experiences of ordinary people during the independence struggle."
— Audrey Kahin

Mary Steedly is Professor of Anthropology at Harvard University and the author of Hanging without a Rope: Narrative Experience in Colonial and Postcolonial Karoland.
Loading...
or support indie stores by buying on