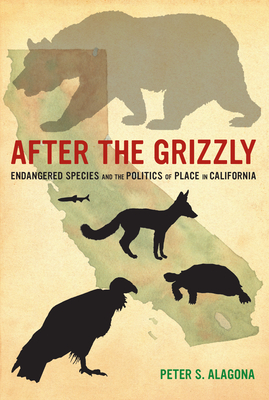 After the Grizzly (Hardcover)

Endangered Species and the Politics of Place in California

Thoroughly researched and finely crafted, After the Grizzly traces the history of endangered species and habitat in California, from the time of the Gold Rush to the present. Peter S. Alagona shows how scientists and conservationists came to view the fates of endangered species as inextricable from ecological conditions and human activities in the places where those species lived.

Focusing on the stories of four high-profile endangered species—the California condor, desert tortoise, Delta smelt, and San Joaquin kit fox—Alagona offers an absorbing account of how Americans developed a political system capable of producing and sustaining debates in which imperiled species serve as proxies for broader conflicts about the politics of place. The challenge for conservationists in the twenty-first century, this book claims, will be to redefine habitat conservation beyond protected wildlands to build more diverse and sustainable landscapes.

Peter S. Alagona is Assistant Professor of History and Environmental Studies at the University of California, Santa Barbara. He was Visiting Assistant Professor at Stanford and Beagle Environmental Fellow at Harvard and previously worked as a national park ranger and as a consulting ecologist. Since 2009, he has been an Associate Editor for the MIT Press series Histories for a Sustainable Future.

Praise For After the Grizzly: Endangered Species and the Politics of Place in California…

"Alagona adroitly documents the roles that historical contingency and a few influential, passionate people can play in shaping the mixed fortunes of endangered species."
— Science

"Unquestionably one of the best books about endangered species in the United States ever written . . . Richly detailed
empirical research, compelling contemporary relevance, and arresting stories rendered in eloquent prose . . . a
major and much needed contribution."

"On the landmark species-saving law’s 40th anniversary, environmental historian Peter Alagona explains why it doesn’t quite work, and offers a path toward recovery."
— Smithsonian Magazine

"Shows how a political system was designed around [four endangered species] to speak about broader issues of place."
— Santa Barbara News-Press

"This well written and timely volume...is a must-read for students and researchers of natural resources law and policy..."
— Biological Conservation

“[Alagona] is passionate about preserving the diversity and richness of the natural world and attuned to the complexities of related issues. Throughout, [this book teaches] us much about what we need to be doing—and why it is vitally important to care.”
— Foreword
or support indie stores by buying on
Copyright © 2020 American Booksellers Association