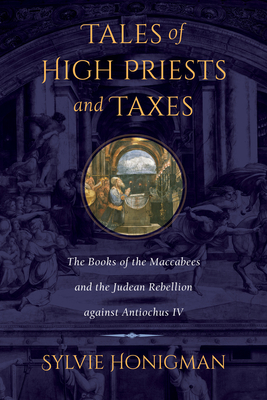 Tales of High Priests and Taxes

In the wake of the conquests of Alexander the Great, the ancient world of the Bible—the ancient Near East—came under Greek rule, and in the land of Israel, time-old traditions and Greek culture met. But with the accession of King Antiochos IV, the soft power of culture was replaced with armed conflict, and soon the Jews rebelled against their imperial masters, as recorded in the Biblical books of the Maccabees. Whereas most scholars have dismissed the biblical accounts of religious persecution and cultural clash, Sylvie Honigman combines subtle literary analysis with deep historical insight to show how their testimony can be reconciled with modern historical analysis by conversing with the biblical authors, so to speak, in their own language to understand the way they described their experiences. Honigman contends that these stories are not mere fantasies but genuine attempts to cope with the massacre that followed the rebellion by giving it new meaning. This reading also discloses fresh political and economic factors.


Praise For Tales of High Priests and Taxes: The Books of the Maccabees and the Judean Rebellion against Antiochos IV (Hellenistic Culture and Society #56)…

"Remarkably comprehensive . . . Tales of High Priests and Taxes deserves to be at the center of discussion in the coming years."
— Journal of Jewish Studies

"Honigman presents a sophisticated, encompassing, and ultimately persuasive reconstruction of the political, economic, cultural and literary forces at work that resulted in the production of these two puzzling books."
— Heythrop Journal

Sylvie Honigman is Professor of History at Tel Aviv University.
or support indie stores by buying on