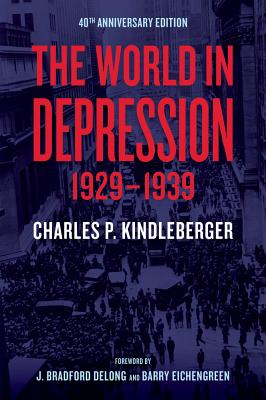 In this magisterial account of the Great Depression, MIT economist Charles Kindleberger emphasizes three factors that continue to shape global financial markets: panic, the power of contagion, and importance of hegemony. Reissued on its fortieth anniversary with a new foreword by Barry J. Eichengreen and J. Bradford DeLong, this masterpiece of economic history shows why U.S. Treasury Secretary Lawrence Summers, during the darkest hours of the 2008 global financial crisis, turned to Kindleberger and his peers for guidance.

"Kindleberger has written perhaps the finest analytical account of the run-up to the Great Depression and the ensuing run-down from it into mild recovery and eventual world war. . . . [This] brilliant book remains a carefully documented admonition to our leading spirits to 'look to the ends' of what they are currently about."
— Times Literary Supplement

"Kindleberger takes Us through the depression decade year by year, dealing with investment, trade, money and security markets, and gold movements in the United States and Western Europe. The book is crammed with judicious insights concerning the motivations of the principal actors, insights based on memoirs as well as the works of eco- nomic historians. This is a work by an economist for historians, and historians will benefit greatly. There is not a single equation in the book, and the charts and tables are accessible enough for the most nonquantitative among us."
— American Historical Review

"This book fills a gap in the economic literature. There exists many mongraphs on the depression in particular countries and on special aspects, but I do not know of any book on the Great Depression, with the accent on its world-wide scope, that applies modern trade and macroeconomic theory. The book's style is lively, the narrative flows quickly; it is C.P. Kindleberger at his best."
— Journal of Economic Literature

"Certainly this volume sets the high standard we have come to expect from its author. . . . This is an interesting book not just because of Professor Kindleberger's clarity of style but also because he asks challenging and pertinent questions. His answers to these questions are always interesting."
— History

"Bringing together the factual pieces from his wide reading in published sources, he leads us toward a more systematic view of the unstable international economy of the 1920s and 1930s. Historians should be grateful for his readable narrative and his straightforward discussions of mechanisms of international trade and finance which baffle most non- economists."
— Business History Review

"Though written from an avowedly American point of view, it is remarkable for the extensive use made of European sources."
— Economica

Charles P. Kindleberger (1910-2003) was an economic historian at the Massachusetts Institute of Technology. Educated at the University of Pennsylvania and Columbia University, he worked for the Federal Reserve Bank of New York and the Bank for International Settlements before serving on the Board of Governors of the Federal Reserve System from 1940 to 1942. After the Second World War, he became a leading architect of the Marshall Plan. He joined the economics faculty at MIT in 1948 and retired in 1976 as the Ford International Professor of Economics.
J. Bradford DeLong is Professor of Economics at the UC Berkeley and Research Associate at the National Bureau of Economic Research. From 1993-1995, he was Deputy Assistant Secretary of the U.S. Treasury for Economic Policy.
Barry J. Eichengreen is the George C. Pardee and Helen N. Pardee Professor of Economics and Professor of Political Science at UC Berkeley. He is a Research Associate at the National Bureau of Economic Research, Research Fellow of the Centre for Economic Policy Research (London, England), and has been a Senior Policy Advisor at the International Monetary Fund.