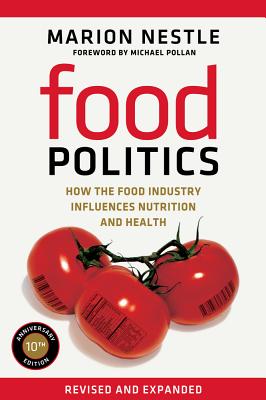 We all witness, in advertising and on supermarket shelves, the fierce competition for our food dollars. In this engrossing exposé, Marion Nestle goes behind the scenes to reveal how the competition really works and how it affects our health. The abundance of food in the United States--enough calories to meet the needs of every man, woman, and child twice over--has a downside. Our over-efficient food industry must do everything possible to persuade people to eat more--more food, more often, and in larger portions--no matter what it does to waistlines or well-being.

Like manufacturing cigarettes or building weapons, making food is big business. Food companies in 2000 generated nearly $900 billion in sales. They have stakeholders to please, shareholders to satisfy, and government regulations to deal with. It is nevertheless shocking to learn precisely how food companies lobby officials, co-opt experts, and expand sales by marketing to children, members of minority groups, and people in developing countries. We learn that the food industry plays politics as well as or better than other industries, not least because so much of its activity takes place outside the public view.

Editor of the 1988 Surgeon General's Report on Nutrition and Health, Nestle is uniquely qualified to lead us through the maze of food industry interests and influences. She vividly illustrates food politics in action: watered-down government dietary advice, schools pushing soft drinks, diet supplements promoted as if they were First Amendment rights. When it comes to the mass production and consumption of food, strategic decisions are driven by economics--not science, not common sense, and certainly not health. No wonder most of us are thoroughly confused about what to eat to stay healthy.

An accessible and balanced account, Food Politics will forever change the way we respond to food industry marketing practices. By explaining how much the food industry influences government nutrition policies and how cleverly it links its interests to those of nutrition experts, this path-breaking book helps us understand more clearly than ever before what we eat and why.

Praise For Food Politics: How the Food Industry Influences Nutrition and Health (California Studies in Food and Culture #3)…

"Combining the scientific background of a researcher and the skills of a teacher, [Nestle] has made a complex subject easy to understand."
— New York Times

“The ironically named Nestle does for the entire food industry what Eric Schlosser did for fast food in Fast Food Nation—a scathing and sometimes shocking expose of an industry we have taken for granted. This award-winning book looks at how the sheer volume of food available in North America has created questionable marketing practices, to say the least.”
— Toronto Globe & Mail

“A solid, important treatise. Taking the health effects as given, it details how food companies undermine public health and infiltrate institutions that are sworn to protect it. If, after Marxism’s demise, you need evidence of the pervasive complicity of government in the amassing of wealth by a few to the detriment of the many, look no further.”
— American Prospect

“In a country that is being targeted by a food industry that will make and market any product that sells, even to children, regardless of its nutritional value or its effect on health, Food Politics is required reading.”
— Bloomsbury Review

“Nestle is simply one of the nation’s smartest and most influential authorities on nutrition and food policy.”
— Sun-Sentinel

"Food Politics is a book that deserves to change national and international attitudes, as Carson's Silent Spring did in the 1960s."
— American Journal of Clinical Nutrition

"Nestle berates the food companies for going to great lengths to protect what she calls "techno-foods" by confusing the public regarding distinctions among foods, supplements, and drugs, thus making it difficult for federal regulators to guard the public. She urges readers to inform themselves, choose foods wisely, demand ethical behavior and scientific honesty, and promote better cooperation among industry and government. This provocative work will cause quite a stir in food industry circles. Highly recommended."
— Library Journal

"In her exquisitely researched book, Nestle details how the food industry’s tendrils have reached into every aspect of nutritionists’ work and are suffocating its public health goals. Food Politics provides rich case studies of how the industry infiltrates nutrition departments at universities and federal agencies and intermingles unabashedly with the U.S. Department of Agriculture (USDA)."
— Health Education & Behavior

"In the tradition of Upton Sinclair, Eric Schlosser and Michael Pollan, Nestle exposes the dark side of food. A life-giving substance, food can kill us, and Nestle never loses sight of the seriousness of this issue throughout the text."
— Food Anthropology

“Food Politics is a well-researched, thoughtful, and angry book. Nestle is most eloquent in her analyses of the relationship between government and industry. . . .  An invaluable addition to the literature.”
— Technology and Culture

Marion Nestle is Professor and Chair of the Department of Nutrition and Food Studies at New York University. Author of Nutrition in Clinical Practice (1985), she has served as a nutrition policy advisor to the Department of Health and Human Services and as a member of nutrition and science advisory committees to the U.S. Department of Agriculture and the Food and Drug Administration. She is the author of Safe Food: Bacteria, Biotechnology, and Bioterrorism (California, 2003), Pet Food Politics: The Chihuahua in the Coal Mine (California, 2010), and Why Calories Count: From Science to Politics (California, 2012), among other books.
or support indie stores by buying on