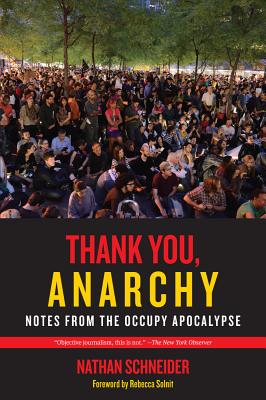 Notes from the Occupy Apocalypse

Thank You, Anarchy is an up-close, inside account of Occupy Wall Street’s first year in New York City, written by one of the first reporters to cover the phenomenon. Nathan Schneider chronicles the origins and explosive development of the Occupy movement through the eyes of the organizers who tried to give shape to an uprising always just beyond their control. Capturing the voices, encounters, and beliefs that powered the movement, Schneider brings to life the General Assembly meetings, the chaotic marches, the split-second decisions, and the moments of doubt as Occupy swelled from a hashtag online into a global phenomenon.

A compelling study of the spirit that drove this watershed movement, Thank You, Anarchy vividly documents how the Occupy experience opened new social and political possibilities and registered a chilling indictment of the status quo. It was the movement’s most radical impulses, this account shows, that shook millions out of a failed tedium and into imagining, and fighting for, a better kind of future.

Praise For Thank You, Anarchy: Notes from the Occupy Apocalypse…

"Schneider does a remarkable job of conveying the euphoric sense of possibility that transformed so many people in the square, as well as the frustrations that came after the New York City Police Department cleared out the occupation in the dead of night. . . . Political moments like Occupy crest and subside, and Occupy has subsided. Whatever happens next will be new, but it will inevitably build on Occupy. [Schneider's book and others] go a long way toward ensuring that the experience gained in Liberty Square is preserved and passed on."
— Nick Pinto

"I consider this book one of the lasting benefits of Occupy."
— David Swanson

"Schneider has quickly become one of the “best and the brightest”—to borrow a phrase from the 1960s—in a generation of intellectuals and activists who are reinventing the American radical tradition. In the under-thirty crowd, there’s probably no one with a deeper affinity for the Sixties than Schneider, and no one more eager to question the legacies of the Sixties than he—all of which makes his books and articles provocative and entertaining."
— Jonah Raskin

"Provides a unique insiders’ account of the original Occupy Wall Street encampment in Zuccotti Park in New York City, along with compelling data on the movement’s internal and external struggles, its ideological orientations, as well as its diffusion into other, related movements."
— Matt Sheedy

"Schneider writes lyrically about the communitarian joy of being at Zuccotti Park, which for him was clearly a spiritual experience as much as a political one. . . . And the chief message of his book is that the true significance of Occupy lay not in its tangible effects on the outside world but in the process of Occupying itself."
— Adam Kirsch

"Thank You Anarchy, Notes From the Apocalypse is a new, brilliantly candid and detailed inside account of the Occupy Movement as it grew to natural prominence and then was displaced by brutal police action around the nation."
— Mark Karlin

"Some two years after Zuccotti Park was first liberated—and duly rechristened Liberty Square—much has been written about the movement that was born there. But few accounts have been as eloquent, as personal, or as nakedly honest as Thank You, Anarchy. It's a book about how collective common sense can change, and what that messy, maddening, beautiful process looks like. With an insider's zeal and an outsider's prudence, Schneider shows Occupy for the miraculous, apocalyptic experiment it was."
— Sam Ross-Brown

"Schneider's panoptic reporting in Thank You, Anarchy brings to mind the work of George Orwell in Down and Out in Paris and London, the books of Robert Coles on his experiences as a psychiatrist in the South, and Norman Mailer's The Armies of the Night on the 1967 anti-war march in Washington."
— Colman McCarthy

"This detailed account of the inception and growth of the Occupy movement touched me in a way I wasn’t at all expecting. . . . When Schneider’s interviewees were really starting to challenge my thinking, I appreciated that the not-so-objective reporter had held my hand through the first few chapters. Rather than hit the reader over the head with anarchism and a paradigm shift, Schneider eases into this thing called anarchy, activism and organization. And the movement made sense."
— Elizabeth Reavey

Nathan Schneider is the author of God in Proof: The Story of a Search, from the Ancients to the Internet (UC Press). He wrote about Occupy Wall Street for Harper’s, The Nation, The New York Times, and Boston Review, among other publications. He is an editor of the websites Waging Nonviolence and Killing the Buddha.
Loading...
or support indie stores by buying on