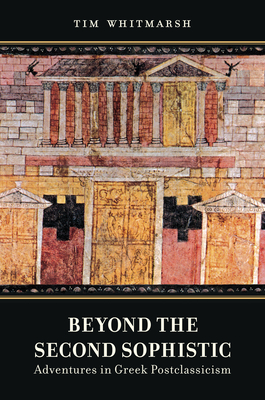 Beyond the Second Sophistic

The “Second Sophistic” traditionally refers to a period at the height of the Roman Empire’s power that witnessed a flourishing of Greek rhetoric and oratory, and since the 19th century it has often been viewed as a defense of Hellenic civilization against the domination of Rome. This book proposes a very different model. Covering popular fiction, poetry and Greco-Jewish material, it argues for a rich, dynamic, and diverse culture, which cannot be reduced to a simple model of continuity. Shining new light on a series of playful, imaginative texts that are left out of the traditional accounts of Greek literature, Whitmarsh models a more adventurous, exploratory approach to later Greek culture. Beyond the Second Sophistic offers not only a new way of looking at Greek literature from 300 BCE onwards, but also a challenge to the Eurocentric, aristocratic constructions placed on the Greek heritage. Accessible and lively, it will appeal to students and scholars of Greek literature and culture, Hellenistic Judaism, world literature, and cultural theory.

Praise For Beyond the Second Sophistic: Adventures in Greek Postclassicism…

"Beyond the Second Sophistic is a quietly passionate and intellectually complex book...The world of late ancient Greek literature is a profoundly exciting and deceptive one, and there is no better guide to it working today than Tim Whitmarsh."
— Edith Hall

"This collection of essays is a treasure-house of insights, shaped within a sometimes polemical template which will surely shift the discourse and the future of scholarship on imperial Greek literature."
— Calum A. Maciver