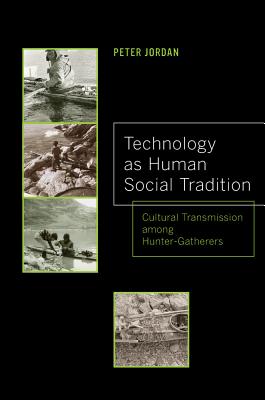 Technology as Human Social Tradition outlines a novel approach to studying variability and cumulative change in human technology—prominent research themes in both archaeology and anthropology. Peter Jordan argues that human material culture is best understood as an expression of social tradition. In this approach, each artifact stands as an output of a distinctive operational sequence with specific choices made at each stage in its production. Jordan also explores different material culture traditions that are propagated through social learning, factors that promote coherent lineages of tradition to form, and the extent to which these cultural lineages exhibit congruence with one another and with language history.

Drawing on the application of cultural transmission theory to empirical research, Jordan develops a descent-with-modification perspective on the technology of Northern Hemisphere hunter-gatherers. Case studies from indigenous societies in Northwest Siberia, the Pacific Northwest Coast, and Northern California provide cross-cultural insights related to the evolution of material culture traditions at different social and spatial scales. This book promises new ways of exploring some of the primary factors that generate human cultural diversity in the deep past and through to the present.

"Peter Jordan has written what I believe will come to be recognised as one of the most influential books in evolutionary anthropology and archaeology of this decade. It is important as it nimbly engages with what is arguably the fundamental concern of a significant number of social anthropologists and archaeologists, that of how the complex interactions between social structure and human agency contribute to the development of cultural traditions."
— Antiquity

Peter Jordan is Director of the Arctic Centre at the University of Groningen and author of Material Culture and Sacred Landscape (2003), editor of Landscape and Culture in Northern Eurasia (2011), and coeditor of The Oxford Handbook of the Archaeology and Anthropology of Hunter-Gatherers (2014) and Ceramics before Farming (2009). Jordan is also series coeditor for Archaeology of the North with Cambridge University Press.
Loading...
or support indie stores by buying on