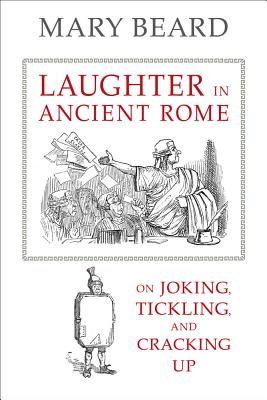 On Joking, Tickling, and Cracking Up (Sather Classical Lectures #71)

What made the Romans laugh? Was ancient Rome a carnival, filled with practical jokes and hearty chuckles? Or was it a carefully regulated culture in which the uncontrollable excess of laughter was a force to fear—a world of wit, irony, and knowing smiles? How did Romans make sense of laughter? What role did it play in the world of the law courts, the imperial palace, or the spectacles of the arena?

Laughter in Ancient Rome explores one of the most intriguing, but also trickiest, of historical subjects. Drawing on a wide range of Roman writing—from essays on rhetoric to a surviving Roman joke book—Mary Beard tracks down the giggles, smirks, and guffaws of the ancient Romans themselves. From ancient “monkey business” to the role of a chuckle in a culture of tyranny, she explores Roman humor from the hilarious, to the momentous, to the surprising.  But she also reflects on even bigger historical questions. What kind of history of laughter can we possibly tell? Can we ever really “get” the Romans’ jokes?


Praise For Laughter in Ancient Rome: On Joking, Tickling, and Cracking Up (Sather Classical Lectures #71)…

“Laughter in Ancient Rome: On Joking, Tickling, and Cracking Up, which has just been published, is an engaging exploration of what made the Romans laugh—bad breath, among other things—but it also explores dimensions of Roman sensibility that have become elusive to us."
— New Yorker

"Few things are more tiresome than seeing a joke analyzed. . . . Beard’s book avoids pedantry but also its opposite, the archness that preens itself on 'not taking humor too seriously' and signals inane wordplays with 'pun intended!' More importantly, her treatment makes one look with new eyes  . . . even at works she does not herself discuss . . . [a] stimulating book."

"[Beard] makes the Romans come alive and through them, gets readers to ponder that most fundamental and uniquely human facility—laughter. The phenomenal Ms. Beard has written another cracking book, one of her best, I think."
— Independent

"Superbly acute and unashamedly complex. . . . To our vision of the solemn grandeur that was Rome, she restores a raucous, ghostly laughter."
— Telegraph

"Like a great piece of archaeology, Laughter in Ancient Rome allows us to glimpse ourselves in the cracked mirror of a distant culture."
— Washington Post

"Expect to be engaged by an enthralling book."
— Spectator

"[Beard's] central question is simple: what made the Romans laugh? Her answers are pleasingly complex. . . . Beard is always enlightening, and writes with a perfect balance of forensic detail and wide-ranging intellect."
— Scotsman

"Laughter in Ancient Rome is never dull. Beard's tone is conversational throughout, and it's almost as if the reader gets to experience a little of what she's like as a lecturer."
— Irish Independent

"This is a very sensible, readable, and useful volume. . . . A valuable contribution to scholarship on a difficult topic."
— Bryn Mawr Classical Review

"You can read hundreds of books on Roman emperors and conquests; this represents a valiant attempt to bring a little understanding of a smaller, but no less important, part of what made Rome run."
— Columbus Commercial Dispatch

"What made the Romans laugh? It’s an incredible, almost childlike thought to have. But in this characteristically brilliant book by  Mary Beard, this simple thought becomes a mental projection that conjures up the world of Rome as well or better than any book in recent memory."
— Flavorwire

"Laughter in Ancient Rome is a book that is filled with good sense and sound scholarship. It is a worthy successor to the previous published volumes of the Sather lectures."
— Hermathena

Beard’s ability to draw together a wide array of ancient and modern references in her discussions is impressive... Laughter in Ancient Rome succeeds in leading sympathetic readers on a stimulating journey through Roman “laughterhood”.
— Phoenix

"Written in Beard's trademark combination of erudition and effortless prose, Laughter in Ancient Rome is a fascinating combination of history, psychology, linguistic exploration and humor. This is scholarly writing at its best."
— Shelf Awareness for Readers

"Beard has posed excellent questions about Roman laughter . . . Her engaging style of writing draws the reader into the discussion. . . . A must read."
— American Historical Review

Mary Beard is Professor of Classics at Cambridge University. Her many books include The Roman Triumph and The Fires of Vesuvius.
Loading...
or support indie stores by buying on