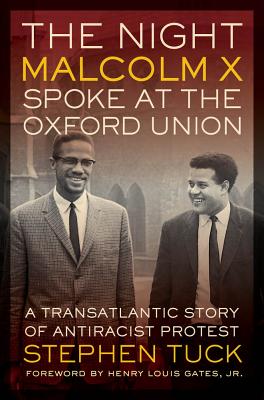 The Night Malcolm X Spoke at the Oxford Union

A Transatlantic Story of Antiracist Protest

Less than three months before he was assassinated, Malcolm X spoke at the Oxford Union—the most prestigious student debating organization in the United Kingdom. The Oxford Union regularly welcomed heads of state and stars of screen and served as the training ground for the politically ambitious offspring of Britain’s "better classes." Malcolm X, by contrast, was the global icon of race militancy. For many, he personified revolution and danger. Marking the fiftieth anniversary of the debate, this book brings to life the dramatic events surrounding the visit, showing why Oxford invited Malcolm X, why he accepted, and the effect of the visit on Malcolm X and British students.

Stephen Tuck tells the human story behind the debate and also uses it as a starting point to discuss larger issues of Black Power, the end of empire, British race relations, immigration, and student rights. Coinciding with a student-led campaign against segregated housing, the visit enabled Malcolm X to make connections with radical students from the Caribbean, Africa, and South Asia, giving him a new perspective on the global struggle for racial equality, and in turn, radicalizing a new generation of British activists. Masterfully tracing the reverberations on both sides of the Atlantic, Tuck chronicles how the personal transformation of the dynamic American leader played out on the international stage.


Praise For The Night Malcolm X Spoke at the Oxford Union: A Transatlantic Story of Antiracist Protest…

"The Night Malcolm X Spoke at the Oxford Union is both a lucid portrait of Malcolm X at the height of his powers and a piercing exploration of the history of race in Britain — one that speaks every bit as much to our present-day circumstances as to the radicalism of 50 years ago."
— Financial Times

"Tuck has resurrected the story of the British civil rights struggle, as resolute and stirring as the struggle in the US. Read it, be moved and enraged, and ask why antiracism gave up and went to bed."
— The Independent

"If there is a legacy to be carried from this book, for me it is in the salient need to internationalise our struggles and our histories. Often dominated by American discourses and figures of anti-racist protest, many of the transatlantic connections evident in resistance movements noted in this book have been obfuscated in service of more sanitised historical narratives. . . . The 50th anniversary can be an opportunity to sit back and admire the oratory of Malcolm X, or it can be an opportunity to remind ourselves and re-enforce a cross-border, transnational, transhistorical struggle — just as the Oxford students in the 1960s did."
— Mahmoud Ally

"Tuck’s history reads like magazine journalism—packing both a kaleidoscopic, global view of race in the ’60s and a tight, propulsive story of Malcolm X’s December 1964 trip to England shortly before his death."—The Best Books About the Volatile 1960s
— Daily Beast

"Tuck’s narrative history recounts the “story” . . . of Malcolm’s visit to Oxford, which he does through five well-crafted chapters."
— Times Literary Supplement

"Tuck is to be thanked for bringing this important historical moment back to light and, in situating it in its wider context, contributing significantly to our understanding of the transatlantic civil rights movement and Oxford’s particular place within it. . . . the book is a pleasure to read and should prove enjoyable for historians and non-historians alike: it comes highly recommended for no more complicated reason than this."
— The Voice

"Tuck links the debate night to myriad back stories (from Malcolm X's break with the Nation of Islam to a global engagement with race to the politics of race, empire, and immigration in Britain and Oxford to antiracism protests in Oxford). Tuck's ability to situate such a unique episode within such various and large historical frames is impressive, and he does it deftly. "
— The Journal of American History

Stephen Tuck is Professor of Modern History at the University of Oxford and Director of the Oxford Research Centre in the Humanities. He is the author of several books including We Ain't What We Ought to Be: The Black Freedom Struggle from Emancipation to Obama and coauthor of Historians across Borders: Writing American History in a Global Age (UC Press).
Loading...
or support indie stores by buying on