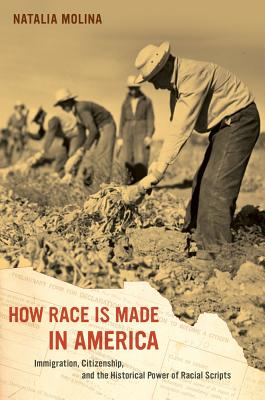 How Race Is Made in America

How Race Is Made in America examines Mexican Americans—from 1924, when American law drastically reduced immigration into the United States, to 1965, when many quotas were abolished—to understand how broad themes of race and citizenship are constructed. These years shaped the emergence of what Natalia Molina describes as an immigration regime, which defined the racial categories that continue to influence perceptions in the United States about Mexican Americans, race, and ethnicity.

Molina demonstrates that despite the multiplicity of influences that help shape our concept of race, common themes prevail. Examining legal, political, social, and cultural sources related to immigration, she advances the theory that our understanding of race is socially constructed in relational ways—that is, in correspondence to other groups. Molina introduces and explains her central theory, racial scripts, which highlights the ways in which the lives of racialized groups are linked across time and space and thereby affect one another. How Race Is Made in America also shows that these racial scripts are easily adopted and adapted to apply to different racial groups.


Praise For How Race Is Made in America: Immigration, Citizenship, and the Historical Power of Racial Scripts (American Crossroads #38)…

"Molina has written a formidable and accessible monograph that unravels the process of race-making to show that the question of belonging requires a relational approach. . . Invaluable."
— Western Historical Quarterly

"Effective in pushing readers to rethink not only particular points in the history of race and immigration, but also our broader conception of the origins and impact of racism and discrimination. . . . Molina succeeds in showing the "relational" character of debates about immigration, and her chapters on the second generation in the Mexican community and deportations in the 1940s and 1950s yield many insights on the unique character of Mexican immigrants' experience."
— Labour/Le Travail

"In detailing the racialization of Mexican Americans through immigration and naturalization laws, Molina provides an apt illustration of the enduring persistence of racial scripts, the ways they are strategically recycled and employed, and how they comprehensively link the experience of all racialized groups."
— Pacific Historical Review

Natalia Molina is Professor of American Studies and Ethnicity at University of Southern California and the recipient of a MacArthur Fellowship. She is the author of the award-winning Fit to Be Citizens?: Public Health and Race in Los Angeles, 1879-1940 and the co-editor of Relational Formations of Race: Theory, Method, and Practice.
Loading...
or support indie stores by buying on