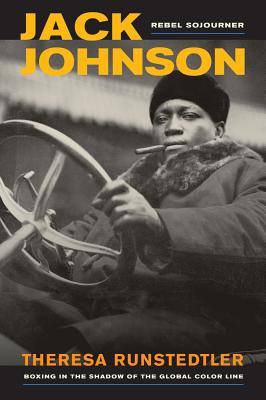 In his day, Jack Johnson—born in Texas, the son of former slaves—was the most famous black man on the planet. As the first African American World Heavyweight Champion (1908–1915), he publicly challenged white supremacy at home and abroad, enjoying the same audacious lifestyle of conspicuous consumption, masculine bravado, and interracial love wherever he traveled. Jack Johnson, Rebel Sojourner provides the first in-depth exploration of Johnson’s battles against the color line in places as far-flung as Sydney, London, Cape Town, Paris, Havana, and Mexico City. In relating this dramatic story, Theresa Runstedtler constructs a global history of race, gender, and empire in the early twentieth century.

“This book is a must-have addition to any boxing fan's library.”
— Glenn Wilson

“My nominee for book of the year by a rising young scholar. . . . For anyone interested in colonialism, imperialism, race, and the global impact of sport, this book is a must read.”
— Mark Naison

Theresa Runstedtler is Assistant Professor of American Studies at the University of Buffalo.
Loading...
or support indie stores by buying on