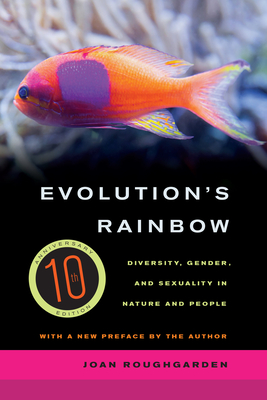 Diversity, Gender, and Sexuality in Nature and People

In this innovative celebration of diversity and affirmation of individuality in animals and humans, Joan Roughgarden challenges accepted wisdom about gender identity and sexual orientation. A distinguished evolutionary biologist, Roughgarden takes on the medical establishment, the Bible, social science—and even Darwin himself. She leads the reader through a fascinating discussion of diversity in gender and sexuality among fish, reptiles, amphibians, birds, and mammals, including primates. Evolution's Rainbow explains how this diversity develops from the action of genes and hormones and how people come to differ from each other in all aspects of body and behavior. Roughgarden reconstructs primary science in light of feminist, gay, and transgender criticism and redefines our understanding of sex, gender, and sexuality. Witty, playful, and daring, this book will revolutionize our understanding of sexuality.

Roughgarden argues that principal elements of Darwinian sexual selection theory are false and suggests a new theory that emphasizes social inclusion and control of access to resources and mating opportunity. She disputes a range of scientific and medical concepts, including Wilson's genetic determinism of behavior, evolutionary psychology, the existence of a gay gene, the role of parenting in determining gender identity, and Dawkins's "selfish gene" as the driver of natural selection. She dares social science to respect the agency and rationality of diverse people; shows that many cultures across the world and throughout history accommodate people we label today as lesbian, gay, and transgendered; and calls on the Christian religion to acknowledge the Bible's many passages endorsing diversity in gender and sexuality. Evolution's Rainbow concludes with bold recommendations for improving education in biology, psychology, and medicine; for democratizing genetic engineering and medical practice; and for building a public monument to affirm diversity as one of our nation's defining principles.


Praise For Evolution's Rainbow: Diversity, Gender, and Sexuality in Nature and People…

“As a compendium of information on sex and gender diversity in the natural world, Roughgarden's is the richest and most authoritative book available, fulfilling a desperate need of readers both within and outside the scientific community . . . this book is going to have a huge impact.”
— Nature

“This brilliant and accessible work of biological criticism has the potential to revolutionize the way readers conceive of gender and sexuality in the natural world. “
— Publishers Weekly

“An insightful blend of biology and social science, this work presents a fresh evolutionary perspective on sex, gender, and sexuality, with widespread implications for modern societies.”
— CHOICE

“The book is thought–provoking, even at times profound. . . . I hope this book will be widely read. It combines the combustible power of a keen intellect with powerful conviction and ethical courage. Scientists are trained to create the illusion of objectivity by hiding their hopes and expectations. Roughgarden tries a different approach, openly injecting her reasoned convictions and policy agenda into her analyses. I don't agree with all of her conclusions, but she has written an important and honest book about a subject that matters.”
— American Scientist

“This extraordinary study strengthens the case for a liberal tolerance and blows open established moral and scientific certainties.”
— Scotsman

“Evolution’s Rainbow not only enhances our knowledge of the natural world, it also offers an ethical way for such knowledge to be used.”
— California Wild

‘A fascinating discussion of diversity in gender and sexuality across a wide variety of animals.”
— Pink Pages

Joan Roughgarden is Professor of Biology Emerita at Stanford University. She is the author of several books, including Evolution and Christian Faith: Reflections of an Evolutionary Biologist and The Genial Gene: Deconstructing Darwinian Selfishness (UC Press).
Loading...
or support indie stores by buying on