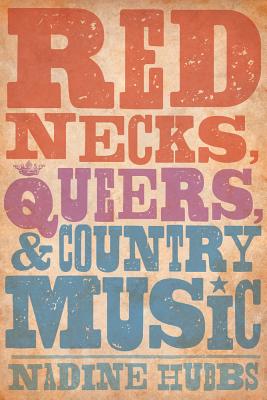 In her provocative new book Rednecks, Queers, and Country Music, Nadine Hubbs looks at how class and gender identity play out in one of America’s most culturally and politically charged forms of popular music. Skillfully weaving historical inquiry with an examination of classed cultural repertoires and close listening to country songs, Hubbs confronts the shifting and deeply entangled workings of taste, sexuality, and class politics.

In Hubbs’s view, the popular phrase “I’ll listen to anything but country” allows middle-class Americans to declare inclusive “omnivore” musical tastes with one crucial exclusion: country, a music linked to low-status whites. Throughout Rednecks, Queers, and Country Music, Hubbs dissects this gesture, examining how provincial white working people have emerged since the 1970s as the face of American bigotry, particularly homophobia, with country music their audible emblem. Bringing together the redneck and the queer, Hubbs challenges the conventional wisdom and historical amnesia that frame white working folk as a perpetual bigot class.

Lucid, important, and thought-provoking, this book is essential reading for students and scholars of American music, gender and sexuality, class, and pop culture.

"The implications of Rednecks, Queers, and Country Music go far beyond the social and sexual politics of a popular music form. . . . With a light and confident hand and an eye on historical context . . . [Hubbs] makes a strong plea for the redneck and the queer—not necessarily always different people—as significant and positive actors in American life."
— Times Literary Supplement

"Rednecks, Queers, and Country Music is an intellectual tour de force that offers a nuanced exploration of the ways that white middle-class attitudes toward country music and white working-class modes of discourse have led to the marginalization of the white working class in political and cultural discourse."
— Journal of the Society for American Music

"An important book that is . . . as much about moral questions as it is about political, social, and cultural concerns. Our challenge is now to act upon the kind of fortitude and consciousness of resistance the author finds at the heart of working-class culture."
— Popular Music and Society

"Hubbs uses country music to uncover longstanding alliances between white working class and queer subcultures. Such alliances have been obscured by stereotypes of low-status whites, or "rednecks," as uniformly bigoted and homophobic, and of "middle America" as homogenous and provincial. Hubbs trenchantly critiques middle-class disavowals of working class culture (exemplified by the phrase "I’ll listen to anything but country"), and meticulously analyzes songs by the Foo Fighters, Gretchen Wilson, David Allen Coe, and others. Hubbs writes that "To hear country on its own terms, we must seek out the particular values and devalued culture of the working class.""
— International Association for the Study of Popular Music

Books of the Year 2014: “A vigorously written study . . . whose argument is as tight as a groundhog trap in Tennessee.”
— Herald Scotland

"One of the most important scholarly discourses on country music of this decade."
— Wondering Sound

"One of the most convention-busting books I’ve ever read. . . . Nadine Hubbs [has] extended the analysis of race and gender in country music beyond the black-white binary and into LGBTQ+ territory."
— Country Queer

"Being a Deep-South redneck who adores country music and its history, I was on guard against how it would be handled by the Professor of Women’s Studies and Music from up North. . . . I found it . . . extraordinary that Hubbs . . . recognizes [the condescension here] and calls the elites on it by challenging views of 'class apartheid' and a 'segregation and opacity [that] allows middle-class people to presume that they understand the working class.'"
— Abbeville Review

Nadine Hubbs is Professor of Women's Studies and Music, Faculty Associate in American Culture, and Director of the Lesbian-Gay-Queer Research Initiative (LGQRI) at the University of Michigan; she is the author of the award-winning book The Queer Composition of America's Sound: Gay Modernists, American Music, and National Identity (UC Press).
Loading...
or support indie stores by buying on