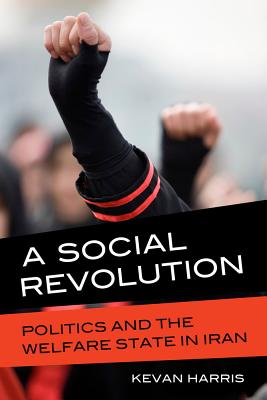 Politics and the Welfare State in Iran

For decades, political observers and pundits have characterized the Islamic Republic of Iran as an ideologically rigid state on the verge of collapse, exclusively connected to a narrow social base. In A Social Revolution, Kevan Harris convincingly demonstrates how they are wrong. Previous studies ignore the forceful consequences of three decades of social change following the 1979 revolution. Today, more people in the country are connected to welfare and social policy institutions than to any other form of state organization. In fact, much of Iran’s current political turbulence is the result of the success of these social welfare programs, which have created newly educated and mobilized social classes advocating for change. Based on extensive fieldwork conducted in Iran, Harris shows how the revolutionary regime endured through the expansion of health, education, and aid programs that have both embedded the state in everyday life and empowered its challengers. This focus on the social policies of the Islamic Republic of Iran opens a new line of inquiry into the study of welfare states in countries where they are often overlooked or ignored.

Kevan Harris is Assistant Professor of Sociology at the University of California, Los Angeles.

Praise For A Social Revolution: Politics and the Welfare State in Iran…

“Harris literally wrote the book on politics and welfare in Iran.”
— Foreign Policy

“This empirically rich study draws on Harris’ extensive fieldwork in Iran and uses welfare policy as a prism through which to view the country’s transition from the shah’s dictatorship to the now nearly 40-year-old theocracy of the Islamic Republic. . . . If Harris is correct, the Islamic Republic contains the seeds of its own transformation.”
— John Waterbury

"A Social Revolution acts as a much-needed corrective to a lot of the academic and policy literature on contemporary Iran, which tends to view the country’s political and social geography in binary terms: namely, a top-heavy, ideological, and oppressive state versus a resistant, cosmopolitan society."
— The Middle East Journal

"Kevan Harris has stepped forward with a reasoned and well-researched presentation of the theocracy as a traditional welfare state."
— Survival: Global Politics and Strategy

“A Social Revolution acts as a much-needed corrective to a lot of the academic and policy literature on contemporary Iran."
— The Middle East Journal

"A Social Revolution shows that the Islamic Republic relied on welfare provision as the main source of state making, and this is a remarkable finding. I contend that this book is a must read for students of welfare studies, the Middle East, and social movements."
— American Journal of Sociology
or support indie stores by buying on
Copyright © 2020 American Booksellers Association