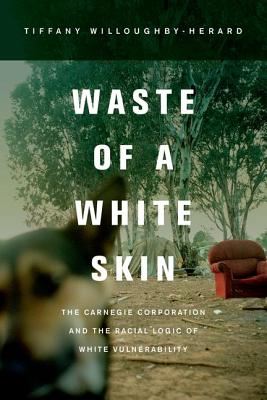 Waste of a White Skin

The Carnegie Corporation and the Racial Logic of White Vulnerability

A pathbreaking history of the development of scientific racism, white nationalism, and segregationist philanthropy in the U.S. and South Africa in the early twentieth century, Waste of a White Skin focuses on the American Carnegie Corporation’s study of race in South Africa, the Poor White Study, and its influence on the creation of apartheid.

This book demonstrates the ways in which U.S. elites supported apartheid and Afrikaner Nationalism in the critical period prior to 1948 through philanthropic interventions and shaping scholarly knowledge production. Rather than comparing racial democracies and their engagement with scientific racism, Willoughby-Herard outlines the ways in which a racial regime of global whiteness constitutes domestic racial policies and in part animates black consciousness in seemingly disparate and discontinuous racial democracies. This book uses key paradigms in black political thought—black feminism, black internationalism, and the black radical tradition—to provide a rich account of poverty and work. Much of the scholarship on whiteness in South Africa overlooks the complex politics of white poverty and what they mean for the making of black political action and black people’s presence in the economic system.

Praise For Waste of a White Skin: The Carnegie Corporation and the Racial Logic of White Vulnerability…

"Willoughby-Herard has made an important intervention by persuasively urging scholars to reexamine the history and legacies of scientific racism through the lens of whiteness studies and intersectionality."
— African Studies Review

"Assuming today’s philanthropic leaders want to disempower, rather than empower, white supremacy in the United States as elsewhere, Willoughby-Herard’s book cautions that we all need to let go of the idea that white poverty is any more pressing than poverty among all Americans."
— HistPhil

"Waste of a White Skin is an ambitious and thought-provoking book. . . . which will have lasting value in the ways that it studies the Carnegie Commission’s agenda and its effect on social research in South Africa, and the influence that its report had on settler societies’ construction of racial regimes."
— Journal of Southern African Studies

"Willoughby-Herard has made an important intervention by persuasively urging scholars to reexamine the history and legacies of scientific racism through the lens of whiteness studies and intersectionality."
— African Studies Review

Tiffany Willoughby-Herard is Associate Professor of African American Studies at the University of California, Irvine.