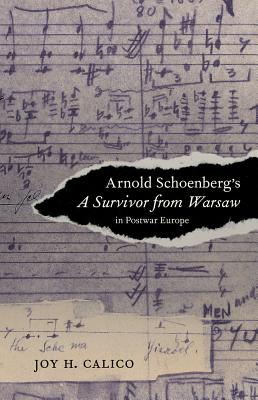 Joy H. Calico examines the cultural history of postwar Europe through the lens of the performance and reception of Arnold Schoenberg's A Survivor from Warsaw—a short but powerful work, she argues, capable of irritating every exposed nerve in postwar Europe. Schoenberg, a Jewish composer whose oeuvre had been one of the Nazis’ prime exemplars of entartete (degenerate) music, immigrated to the United States and became an American citizen. Both admired and reviled as a pioneer of dodecaphony, he wrote this twelve-tone piece about the Holocaust in three languages for an American audience. This book investigates the meanings attached to the work as it circulated through Europe during the early Cold War in a kind of symbolic musical remigration, focusing on six case studies: West Germany, Austria, Norway, East Germany, Poland, and Czechoslovakia. Each case is unique, informed by individual geopolitical concerns, but this analysis also reveals common themes in anxieties about musical modernism, Holocaust memory and culpability, the coexistence of Jews and former Nazis, anti-Semitism, dislocation, and the presence of occupying forces on both sides of the Cold War divide.

"Joy Calico, however, writes with an ease and fluidity that positively invite the reader to understand her ideas and observations. She takes one of Schoenberg’s most important American works and uses it as a political barometer during the crucial post-war years of 1948 to 1968. As concepts go, it is quite brilliant. Addressing Cold War cultural politics in Germany, Austria, Norway, Poland and Czechoslovakia using Schoenberg’s A Survivor from Warsaw clearly illuminates the political complexities of the time."
— Michael Haas

"Joy H. Calico’s new book is an impressive work of cultural history... on its own, fascinating terms, Calico has written a book that will repay attention from a variety of readers."
— H-German

Joy H. Calico is Associate Professor of Musicology and Director of the Max Kade Center for European and German Studies at Vanderbilt University and the author of Brecht at the Opera (UC Press).
Loading...
or support indie stores by buying on