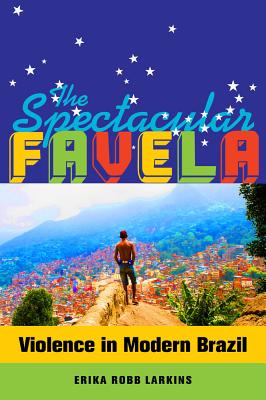 In Rio de Janeiro’s favelas, traffickers assert power through conspicuous displays of wealth and force, brandishing high-powered guns, gold jewelry, and piles of cash and narcotics. Police, for their part, conduct raids reminiscent of action films or video games, wearing masks and riding in enormous armored cars called “big skulls.” Images of these spectacles circulate constantly in local, national, and global media, masking everyday forms of violence, prejudice, and inequality. The Spectacular Favela offers a rich ethnographic examination of the political economy of spectacular violence in Rocinha, Rio’s largest favela. Based on more than two years of residence in the community, the book explores how entangled forms of violence shape everyday life and how that violence is, in turn, connected to the market economy.

Erika Robb Larkins shows how favela violence is produced as a marketable global brand. While this violence is projected in disembodied form through media, the favela is also sold as an embodied experience through the popular practice of favela tourism. The commodification of the favela becomes a form of violence itself; favela violence is transformed into a commercially viable byproduct of a profit-driven war on drugs, which serves to keep the poor marginalized. This book tells the story of how traffickers, police, cameras, tourists, and even anthropologists come together to create what the author calls the “spectacular favela.”

Erika Robb Larkins is an Assistant Professor in the Department of International and Area Studies at the University of Oklahoma.

"[The Spectacular Favela is] wide-ranging and ethnographic, constructing a patient and insightful portrait."
— Times Literary Supplement

"This academic book reads almost like a novel – gripping its reader’s attention with a rich array of characters, experiences, and conversations – as it tells the story of Rocinha favela. Yet it is a far cry from a novel. Indeed, the lives it portrays and theoretical dialogue it creates on violence, its spectacle and commodification are of critical importance to further understanding violence in the margins of society, like the favelas of Rio."
— Environment & Urbanization

"Through her formulation and appropriation of these terms, Larkins’s anthropological treatment of how violence structures relations of coercive power in alternative governance institutions and across territorial scales will be as highly legible to political scientists and sociologists well-schooled in Max Weber’s, Charles Tilly’s, and Benedict Anderson’s writings as to those familiar with anthropology’s more cited scholars, including Foucault and Agamben."
— Latin American Research Review
or support indie stores by buying on
Copyright © 2020 American Booksellers Association