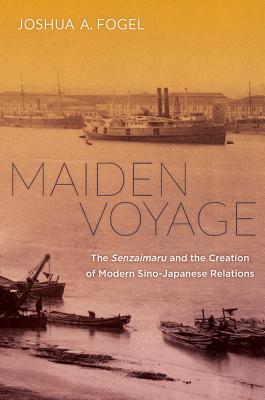 The Senzaimaru and the Creation of Modern Sino-Japanese Relations

By Joshua A. Fogel

After centuries of virtual isolation, during which time international sea travel was forbidden outside of Japan’s immediate fishing shores, Japanese shogunal authorities in 1862 made the unprecedented decision to launch an official delegation to China by sea. Concerned by the fast-changing global environment, they had witnessed the ever-increasing number of incursions into Asia by European powers—not the least of which was Commodore Perry’s arrival in Japan in 1853–54 and the forced opening of a handful of Japanese ports at the end of the decade. The Japanese reasoned that it was only a matter of time before they too encountered the same unfortunate fate as China; their hope was to learn from the Chinese experience and to keep foreign powers at bay. They dispatched the Senzaimaru to Shanghai with the purpose of investigating contemporary conditions of trade and diplomacy in the international city. Japanese from varied domains, as well as shogunal officials, Nagasaki merchants, and an assortment of deck hands, made the voyage along with a British crew, spending a total of ten weeks observing and interacting with the Chinese and with a handful of Westerners. Roughly a dozen Japanese narratives of the voyage were produced at the time, recounting personal impressions and experiences in Shanghai. The Japanese emissaries had the distinct advantage of being able to communicate with their Chinese hosts by means of the “brush conversation” (written exchanges in literary Chinese). For their part, the Chinese authorities also created a paper trail of reports and memorials concerning the Japanese visitors, which worked its way up and down the bureaucratic chain of command.

This was the first official meeting of Chinese and Japanese in several centuries. Although the Chinese authorities agreed to few of the Japanese requests for trade relations and a consulate, nine years later China and Japan would sign the first bilateral treaty of amity in their history, a completely equal treaty. East Asia—and the diplomatic and trade relations between the region’s two major players in the modern era—would never be the same.

Joshua A. Fogel is Canada Research Chair and Professor of History at York University. He is the author of many books, including Articulating the Sinosphere: Sino-Japanese Relations in Space and Time and Japanese Historiography and the Gold Seal of 57 CE: Relic, Text, Object, Fake. He is also the editor of The Nanjing Massacre in History and Historiography and the online journal Sino-Japanese Studies.

Praise For Maiden Voyage: The Senzaimaru and the Creation of Modern Sino-Japanese Relations…

"Fogel’s masterful scholarship provides insight into the historian’s craft as he tracks evidence, openly interrogates documents, and asks questions that may not be directly answerable but can be puzzled out."
— Catherine L. Phipps

"This informative and incredibly well researched book is a pleasure to read."
— Robert Hellyer
or support indie stores by buying on
Copyright © 2020 American Booksellers Association