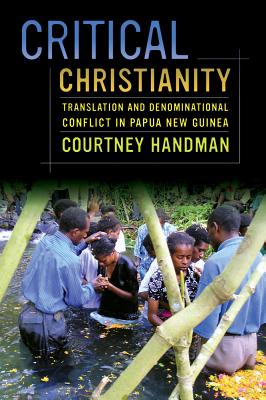 In Critical Christianity, Courtney Handman analyzes the complex and conflicting forms of sociality that Guhu-Samane Christians of rural Papua New Guinea privilege and celebrate as “the body of Christ.” Within Guhu-Samane churches, processes of denominational schism—long relegated to the secular study of politics or identity—are moments of critique through which Christians constitute themselves and their social worlds. Far from being a practice of individualism, Protestantism offers local people ways to make social groups sacred units of critique. Bible translation, produced by members of the Summer Institute of Linguistics, is a crucial resource for these critical projects of religious formation. From early interaction with German Lutheran missionaries to engagements with the Summer Institute of Linguistics to the contemporary moment of conflict, Handman presents some of the many models of Christian sociality that are debated among Guhu-Samane Christians. Central to the study are Handman's rich analyses of the media through which this critical Christian sociality is practiced, including language, sound, bodily movement, and everyday objects. This original and thought-provoking book is essential reading for students and scholars of anthropology and religious studies.

Praise For Critical Christianity: Translation and Denominational Conflict in Papua New Guinea (The Anthropology of Christianity #16)…

"Handman offers a careful analysis of the doings and sayings of New Life Christians."
— L. Lindstrom

"Courtney Handman’s Critical Christianity...display[s] some of the best work being done right now in the anthropology of Christianity."
— Marginalia, Los Angeles Review of Books

"Critical Christianity deserves to be read widely beyond its immediate audience of scholars of language, Christianity, and Melanesia for the way it both opens up, and begins to answer, fresh questions about critique and sociality, translation and ritual semiosis, and intersections between anthropology and theology."
— Oceania

"Handman provides an important new perspective on how Christianity might be considered not merely the object of critique but also a space for and means of social and cultural critique."
— American Anthropologist

"The anthropology of Christianity has transitioned from attempts to establish its place in the discipline to a field of study with its own internal debates and contending points of view, and Handman’s Critical Christianity is an ambitious entry into this arena that tackles schismatic conflict...The result is demanding and rewarding, offering a mix of ethnography and argument on nearly every page."
— Journal of the Royal Anthropological Institute

"Handman’s book is ethnographically very rich and also theoretically well informed. Through clear and lucid prose, she tactfully weaves together various strands of linguistic, anthropological, and historical analyses to form a variegated and complex account of Guhu-Samane Christianity that is both faithful to the lived reality of the people and a substantial contribution to the anthropological literature on Christianity in Melanesia."
— American Ethnologist

"The genius of this book is the way the author weaves anthropological theory, ethnographic description, mission history, and theological awareness to help readers understand the sociolinguistic complexities that contribute to the development of a contemporary church in Papua New Guinea . . . [a] cogent, well written, and argued ethnography."
— Anthropos

Courtney Handman is Assistant Professor of Anthropology at the University of Texas at Austin.
Loading...
or support indie stores by buying on