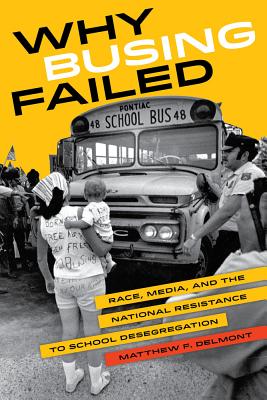 In the decades after the landmark Brown v. Board of Education Supreme Court decision, busing to achieve school desegregation became one of the nation’s most controversial civil rights issues. Why Busing Failed is the first book to examine the pitched battles over busing on a national scale, focusing on cities such as Boston, Chicago, New York, and Pontiac, Michigan. This groundbreaking book shows how school officials, politicians, the courts, and the media gave precedence to the desires of white parents who opposed school desegregation over the civil rights of black students.


Praise For Why Busing Failed: Race, Media, and the National Resistance to School Desegregation (American Crossroads #42)…

"By looking at the antibusing uprisings that were presented in mainstream media, this recommended narrative presents civil rights through the lens of media studies and offers an entirely new way of seeing how recent history was written."
— Library Journal

"Meticulous and insightful. . . . Delmont’s critique is tough but fair."
— The Boston Globe

"Why Busing Failed is an ambitious and well-researched account of an important aspect of the struggle for racial and educational equality in the United States."
— Pacific Historical Review

Matthew F.Delmont is Professor of History at Arizona State University and author of The Nicest Kids in Town: American Bandstand, Rock ‘n’ Roll, and the Struggle for Civil Rights in 1950s Philadelphia.
Loading...
or support indie stores by buying on