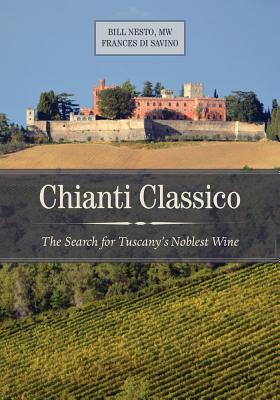 The Search for Tuscany’s Noblest Wine

“An important new book on Chianti Classico: Winners of the André Simon 2013 award for their book The World of Sicilian Wine, Nesto and Di Savino have produced the investigative, scholarly and detailed book that Chianti Classico has long deserved. Nesto and Di Savino are brilliant historic investigators. . . . A must-read for anyone seriously interested in wine.”—Walter Speller, JancisRobinson.com

This book tells the story of the ancient land named Chianti and the modern wine appellation known as Chianti Classico. In 1716, Tuscany’s penultimate Medici ruler, Cosimo III, anointed the region of Chianti, along with three smaller areas in the Florentine State, as the world’s first legal appellations of origin for wine. In the succeeding centuries, this milestone was all but forgotten. By the late nineteenth century, the name Chianti, rather than signifying this historic region and its celebrated wine, identified a simple Italian red table wine in a straw-covered flask.


Praise For Chianti Classico: The Search for Tuscany’s Noblest Wine…

“‘A profound desire to find the truth’ about Chianti Classico. . . . Offers a deep dive into the history, viticulture, and enology of Chianti Classico, the wine region and appellation situated snugly between Florence and Siena, distinct from the surrounding production zone simply called Chianti.”
— The Boston Globe

"Everything you always wanted to know about Chianti Classico (and lots more!) . . . . Does Chianti Classico live up to my high expectations for it? Yes! A great book for anyone who loves Chianti or Tuscany or … wine!”
— The Wine Economist

“Bill Nesto and Frances Di Savino embrace the story, landscape and culture of Chianti Classico . . . . Ultimately, this is the story of a region in search of identity and reputation, a compelling read for anyone who enjoys the wines of Chianti Classico or Tuscany.”
— The Wine Spectator

"How the perception of Chianti Classico has evolved and changed over the years, to the point where it's held in high esteem, is an interesting Italian history lesson that the authors are eager to tell. Then it turns into a delightful travelogue of the region, describing the individual vineyards, estates and wineries. The detailed tasting notes are integral to understanding what's so important about sangiovese and how it's specifically grown and vinified in this area. It made me salivate and rush out to try several of the bottlings."
— Dennis Schaefer

“Profoundly informative, this book speaks to anyone with a taste for Chianti Classico, or anyone who is fascinated by the layered history of Tuscany and how it relates to wine. . . . Makes a compelling argument for why Chianti Classico’s relationship to Tuscany is perhaps more profound and complex than any other denomination wine in Italy. . . . A comeback story worthy of Cosimo III’s groundbreaking intuition.”
— Monica Larner

"A well-researched history book that reads like a novel."

"A fascinating account of a peerless viticultural legacy. . . . Husband and wife Bill Nesto MW and Frances Di Savino make a winning combination, with Frances penning the lion's share of the meticulously researched historical chapters and Bill doing the heavy lifting with sections on Sangiovese, viticulture, and enology."

— The World of Fine Wine

"Nesto and Di Savino have crafted the most complete Chianti overview that has probably ever existed.?"?
— 1WineDude

Bill Nesto is a Master of Wine and a founder of the Wine Studies Program at Boston University, where he is also a Senior Lecturer.

Frances Di Savino is an attorney with a background in medieval and Renaissance studies and is Bill’s partner in life and on the wine road. Bill and Frances coauthored The World of Sicilian Wine, which won the André Simon Book Award in 2013.