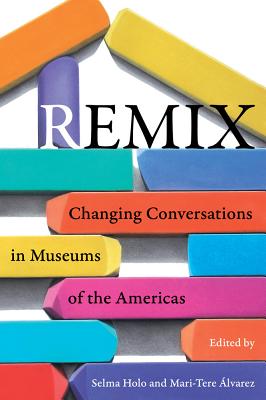 Changing Conversations in Museums of the Americas

Celebrating the diversity of institutions in the United States, Latin America, and Canada, Remix aims to change the discourse about museums from the inside out, proposing a new, “panarchic”—nonhierarchical and adaptive—vision for museum practice. Selma Holo and Mari-Tere Álvarez offer an unconventional approach, one premised on breaching conventional systems of communication and challenging the dialogues that drive the field. Featuring more than forty authors in and around the museum world, Remix frames a series of vital case studies demonstrating how specific museums, large and small, have profoundly advanced or creatively redefined their goals to meet their ever-changing worlds.

Selma Holo is Professor of Art History at University of Southern California and Director of USC’s Fisher Museum of Art and International Museum Institute. She is the author of Beyond the Prado: Museums and Identity in Democratic Spain and Oaxaca at the Crossroads: Managing Memory, Negotiating Change and a coeditor of Beyond the Turnstile: Making the Case for Museums and Sustainable Values.

Mari-Tere Álvarez is Project Specialist at the J. Paul Getty Museum and Associate Director of USC’s International Museum Institute. She coedited Beyond the Turnstile: Making the Case for Museums and Sustainable Values and Arts, Crafts, and Materials in the Age of Global Encounter, 1492–1800, a special edition of the Journal of Interdisciplinary History.