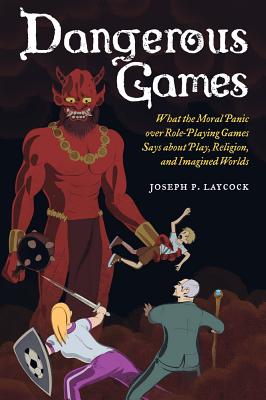 What the Moral Panic over Role-Playing Games Says about Play, Religion, and Imagined Worlds

The 1980s saw the peak of a moral panic over fantasy role-playing games such as Dungeons and Dragons. A coalition of moral entrepreneurs that included representatives from the Christian Right, the field of psychology, and law enforcement claimed that these games were not only psychologically dangerous but an occult religion masquerading as a game. Dangerous Games explores both the history and the sociological significance of this panic.

Fantasy role-playing games do share several functions in common with religion. However, religion—as a socially constructed world of shared meaning—can also be compared to a fantasy role-playing game. In fact, the claims of the moral entrepreneurs, in which they presented themselves as heroes battling a dark conspiracy, often resembled the very games of imagination they condemned as evil. By attacking the imagination, they preserved the taken-for-granted status of their own socially constructed reality. Interpreted in this way, the panic over fantasy-role playing games yields new insights about how humans play and together construct and maintain meaningful worlds.

Laycock’s clear and accessible writing ensures that Dangerous Games will be required reading for those with an interest in religion, popular culture, and social behavior, both in the classroom and beyond.

Praise For Dangerous Games: What the Moral Panic over Role-Playing Games Says about Play, Religion, and Imagined Worlds…

"Dangerous Games presents a detailed and multi-layered history of the social realities surrounding Role Playing Games (RPGs), analyzing a complex legacy of cultural and religious epistemologies, in order to argue that the corresponding moral panic over such games is itself a form of dangerous corrupted play. . . . Overall, Dangerous Games is an important read for students and scholars of contemporary history, religion, popular culture, and mythology."
— Nova Religio

"Dangerous Games is a necessary interjection into the conversation between fantasy role-playing and the hysteria over violent-themed play . . . [and] charges players to keep rolling on, and for those who question such games to reflect on what exactly they find so repugnant from an exploration of imagination and play."
— Reading Religion

"This book deserves a place in the library of any scholar of games as cultural texts—and especially those interested in religion and games."
— American Journal of Play

Joseph P. Laycock is Assistant Professor of Religious Studies at Texas State University. His previous books include Vampires Today: The Truth About Modern Vampirism and The Seer of Bayside: Veronica Lueken and the Struggle for Catholicism. He is also a blogger for Religion Dispatches.
Loading...
or support indie stores by buying on