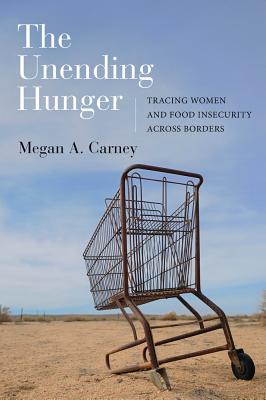 Based on ethnographic fieldwork from Santa Barbara, California, this book sheds light on the ways that food insecurity prevails in women’s experiences of migration from Mexico and Central America to the United States. As women grapple with the pervasive conditions of poverty that hinder efforts at getting enough to eat, they find few options for alleviating the various forms of suffering that accompany food insecurity. Examining how constraints on eating and feeding translate to the uneven distribution of life chances across borders and how “food security” comes to dominate national policy in the United States, this book argues for understanding women’s relations to these processes as inherently biopolitical.

Praise For The Unending Hunger: Tracing Women and Food Insecurity Across Borders…

"Incisive, empathetic, and engaging . . . The rich data Dr. Carney has obtained through her engaged anthropology are a compelling indictment of the human failings of our national food system."
— Marilyn Gates

"Well-written and thoroughly researched . . . The Unending Hunger is an important exploration of the promise of a better life in the United States."
— Food and Foodways

"A timely critical engagement with the partner concepts of food security and insecurity . . . The Unending Hunger has much to offer
a wide range of scholarly and applied readers."
— Food, Culture, and Society

"Compelling... masterfully [contributes] to discussions of biopolitics and boundaries."
— Antipode

Megan A. Carney is Assistant Professor in the School of Anthropology and Director of the Center for Regional Food Studies at the University of Arizona. Her writing has appeared in The Hill, The Conversation, and Civil Eats.
Loading...
or support indie stores by buying on