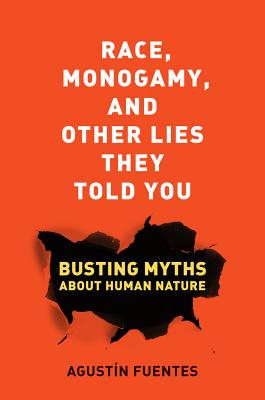 Race, Monogamy, and Other Lies They Told You

There are three major myths of human nature: humans are divided into biological races; humans are naturally aggressive; men and women are truly different in behavior, desires, and wiring. In an engaging and wide-ranging narrative Agustín Fuentes counters these pervasive and pernicious myths about human behavior. Tackling misconceptions about what race, aggression, and sex really mean for humans, Fuentes incorporates an accessible understanding of culture, genetics, and evolution requiring us to dispose of notions of “nature or nurture.” Presenting scientific evidence from diverse fields, including anthropology, biology, and psychology, Fuentes devises a myth-busting toolkit to dismantle persistent fallacies about the validity of biological races, the innateness of aggression and violence, and the nature of monogamy and differences between the sexes. A final chapter plus an appendix provide a set of take-home points on how readers can myth-bust on their own. Accessible, compelling, and original, this book is a rich and nuanced account of how nature, culture, experience, and choice interact to influence human behavior.


Praise For Race, Monogamy, and Other Lies They Told You: Busting Myths about Human Nature…

“From the preface to the appendix, he engages readers in a complex but well-mapped journey that challenges commonly accepted assumptions about the nature of race, aggression, and fundamental differences in the desires and behaviors of men and women. . . . Readers for whom biology, anthropology, and psychology are not disciplines of practice or interest need not fret. The author masterly conveys his knowledge in an informative way. . . . If you are willing to enhance your worldview by sleuthing to discover ‘who we are and why we do what we do, Race, Monogamy, and Other Lies They Told You is for you. Whether you agree with Fuentes or not, it will at least engage your critical thinking skills and encourage you to be a more active and discerning consumer of information.”
— Science

"Where these myths come from, and how to bust them, is the basis of this lively, thoughtful book.”
— Boston Globe

“Accessible, compelling, and original, this book is a rich and nuanced account of how nature, culture, experience, and choice interact to influence human behavior.”
— Guardian

“In this compelling bit of pop science, Fuentes, professor of anthropology at Notre Dame, asks readers to throw out their preconceptions about what it means to be a human. . . . It is a weighing of experience with a healthy dose of speculation and doubt that Fuentes claims is the key to uncovering anthropological truths, and thereby navigating the world as a more responsible and unbiased member of society.”
— Publishers Weekly

"As an introductory text for students . . . the book is clear and engaging. Fuentes provides brief and understandable accounts about the basic biological and cultural concepts associated with each of the myths he lays out, as well as a set of endnotes that might encourage students to look up more material on their own."
— American Journal of Physical Anthropology

“Fuentes deserves praise for and success with this book. The myth-busting toolkit, which is essentially a pattern of questioning, is a wonderful device. . . . Fuentes is not just informing, he is teaching readers how to think critically.”
— Washington Independent Review of Books

“This book is a must for anyone looking to explore where the lines of human nature and artificial class structure are, and where Fuentes says they’ve been artificially created.”
— Charleston Post & Courier

“Engaging. . . . Fuentes’s work goes a long way toward burying some of the most pervasive myths about human beings.”
— Monthly Review