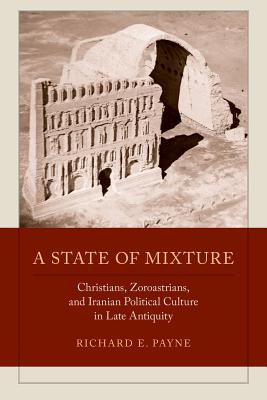 A State of Mixture (Hardcover)

Christian communities flourished during late antiquity in a Zoroastrian political system, known as the Iranian Empire, that integrated culturally and geographically disparate territories from Arabia to Afghanistan into its institutions and networks. Whereas previous studies have regarded Christians as marginal, insular, and often persecuted participants in this empire, Richard Payne demonstrates their integration into elite networks, adoption of Iranian political practices and imaginaries, and participation in imperial institutions.

The rise of Christianity in Iran depended on the Zoroastrian theory and practice of hierarchical, differentiated inclusion, according to which Christians, Jews, and others occupied legitimate places in Iranian political culture in positions subordinate to the imperial religion. Christians, for their part, positioned themselves in a political culture not of their own making, with recourse to their own ideological and institutional resources, ranging from the writing of saints’ lives to the judicial arbitration of bishops. In placing the social history of East Syrian Christians at the center of the Iranian imperial story, A State of Mixture helps explain the endurance of a culturally diverse empire across four centuries.

Richard E. Payne is Neubauer Family Assistant Professor of Ancient Near Eastern History at the University of Chicago.

Praise For A State of Mixture: Christians, Zoroastrians, and Iranian Political Culture in Late Antiquity (Transformation of the Classical Heritage #56)…

"An expertly conceived and beautifully written counterpoint to earlier studies of Christian history in the Sasanian Empire... In his meticulous reading of East Syriac sources and the Middle Persian literatures and histories that underlie them, Payne has substantially contributed to a new body of scholarly studies that is quickly revising our understanding of the place of Christianity in the Sasanian period."
— Marginalia

"Overall, A State of Mixture is an important contribution to the religious situation in the Sasaniden Kingdom and the structural development of the relations between Christians and Zoroastrians prior to Islamic expansion; this research merits close attention."
— Plekos

"Situating itself mostly on Christian sources in Syriac and Arabic from the Sasanid and Islamic periods, but including discussion of seals, bullae, and other artifacts, this text utilizes all three means in its attempt to depict the political culture of the Sasanid period."
— Reading Religion
or
Buy Here
Copyright © 2020 American Booksellers Association