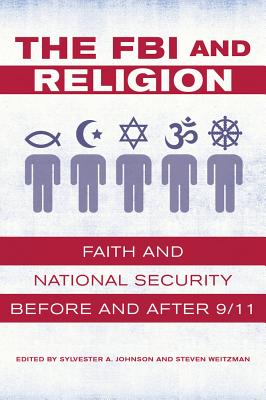 The FBI and Religion

Faith and National Security before and after 9/11

The FBI and Religion recounts this fraught and fascinating history, focusing on key moments in the Bureau’s history. Starting from the beginnings of the FBI before World War I, moving through the Civil Rights Movement and the Cold War, up to 9/11 and today, this book tackles questions essential to understanding not only the history of law enforcement and religion, but also the future of religious liberty in America.


Praise For The FBI and Religion: Faith and National Security before and after 9/11…

"The story of the FBI and religion is not a series of isolated mishaps, argues a new book of essays edited by Steven Weitzman, a professor at the University of Pennsylvania, and Sylvester A. Johnson, a professor at Northwestern University. Over its 109 years of existence, these historians and their colleagues argue, the Bureau has shaped American religious history through targeted investigations and religiously tinged rhetoric about national security."
— The Atlantic

"This fine book will be useful in courses that seek to examine relations between religion, society, and efforts at social control . . . Highly recommended."

"These consistently interesting essays provide a complex, provocative, and sometimes disturbing view of the interactions between an important United States institution and religious groups for more than a century."
— Nova Religio

"A provocative history. . . . highly recommend[ed] . . . for any scholar, government employee, religious practitioner, and anyone residing in the US."
— Reading Religion

"The quality of this volume is impeccable."
— European Legacy

Sylvester A. Johnson is Associate Professor of African American Studies and Religious Studies at Northwestern University.

Steven P. Weitzman is the Abraham Ellis Professor of Hebrew and Semitic Languages and Literatures at the University of Pennsylvania and director of the Herbert D. Katz Center for Advanced Judaic Studies.