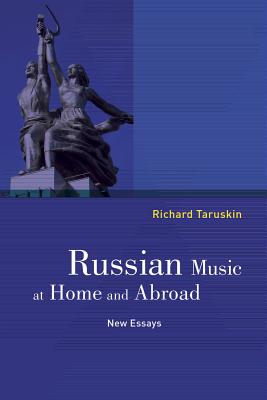 Russian Music at Home and Abroad

This new collection views Russian music through the Greek triad of “the Good, the True, and the Beautiful” to investigate how the idea of "nation" embeds itself in the public discourse about music and other arts with results at times invigorating, at times corrupting. In our divided, post–Cold War, and now post–9/11 world, Russian music, formerly a quiet corner on the margins of musicology, has become a site of noisy contention. Richard Taruskin assesses the political and cultural stakes that attach to it in the era of Pussy Riot and renewed international tensions, before turning to individual cases from the nineteenth century to the present. Much of the volume is devoted to the resolutely cosmopolitan but inveterately Russian Igor Stravinsky, one of the major forces in the music of the twentieth century and subject of particular interest to composers and music theorists all over the world. Taruskin here revisits him for the first time since the 1990s, when everything changed for Russia and its cultural products. Other essays are devoted to the cultural and social policies of the Soviet Union and their effect on the music produced there as those policies swung away from Communist internationalism to traditional Russian nationalism; to the musicians of the Russian postrevolutionary diaspora; and to the tension between the compelling artistic quality of works such as Stravinsky’s Sacre du Printemps or Prokofieff’s Zdravitsa and the antihumanistic or totalitarian messages they convey. Russian Music at Home and Abroad addresses these concerns in a personal and critical way, characteristically demonstrating Taruskin’s authority and ability to bring living history out of the shadows.

Richard Taruskin is the Class of 1955 Professor of Music emeritus at the University of California, Berkeley, where he taught from 1987 to 2014, after twenty-six years at Columbia University (man and boy). He is the author of Stravinsky and the Russian Traditions, On Russian Music, Defining Russia Musically, and the six-volume Oxford History of Western Music.
Loading...
or support indie stores by buying on