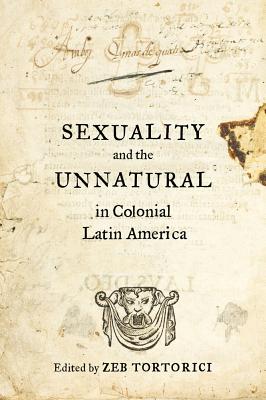 Sexuality and the Unnatural in Colonial Latin America

Sexuality and the Unnatural in Colonial Latin America brings together a broad community of scholars to explore the history of illicit and alternative sexualities in Latin America’s colonial and early national periods. Together the essays examine how "the unnatural” came to inscribe certain sexual acts and desires as criminal and sinful, including acts officially deemed to be “against nature”—sodomy, bestiality, and masturbation—along with others that approximated the unnatural—hermaphroditism, incest, sex with the devil, solicitation in the confessional, erotic religious visions, and the desecration of holy images. In doing so, this anthology makes important and necessary contributions to the historiography of gender and sexuality. Amid the growing politicized interest in broader LGBTQ movements in Latin America, the essays also show how these legal codes endured to make their way into post-independence Latin America.

Praise For Sexuality and the Unnatural in Colonial Latin America…

"This volume greatly expands the range of non-normative—although not necessarily rare—behaviors that shaped the sexual landscape of Spanish and Portuguese America. Bookended by contributions from Lavrin and Pete Sigal, this is a self-aware contribution to the historiography of sexuality. ... With its collection of sharp essays based on truly exceptional archival sources, this collection will be a must-read for scholars interested in the history of sexuality in the Iberian American colonies."
— H-Histsex (H-Net)

"The volume is an absolute success. . . . Tortoricci has brought together an excellent array of scholars and scholarship, making Sexuality and the Unnatural a welcome addition to the literature about colonial Latin America."
— Journal of Interdisciplinary History

Zeb Tortorici is an Assistant Professor of Spanish and Portuguese Languages and Literatures at New York University. He recently coedited Centering Animals in Latin American History as well as two special issues of Radical History Review on the topic of "Queering Archives."
Loading...
or support indie stores by buying on