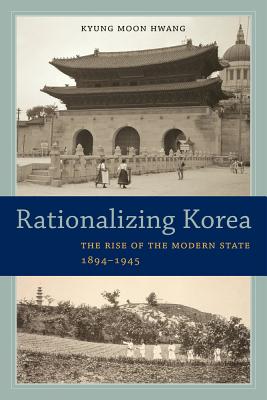 The first book to explore the institutional, ideological, and conceptual development of the modern state on the peninsula, Rationalizing Korea analyzes the state’s relationship to five social sectors, each through a distinctive interpretive theme: economy (developmentalism), religion (secularization), education (public schooling), population (registration), and public health (disease control). Kyung Moon Hwang argues that while this formative process resulted in a more commanding and systematic state, it was also highly fragmented, socially embedded, and driven by competing, often conflicting rationalizations, including those of Confucian statecraft and legitimation. Such outcomes reflected the acute experience of imperialism, nationalism, colonialism, and other sweeping forces of the era.

"[Breaks] new ground... [Hwang has] offered readers an ambitious challenge: one directed to Korean studies, but also one also carrying its implications far beyond."
— Cross-Currents

"Rationalizing Korea is an important contribution to the debates over the origins of the powerful goal-oriented Korean state (or sates), the reforms of Choson Korea, and colonial modernization. Beyond the field of Korean studies, it offers insight for all who are interested in the formation of the modern state."
— Pacific Historical Review

Kyung Moon Hwang is a professor of history and East Asian languages and cultures at the University of Southern California. He is the author of A History of Korea: An Episodic Narrative and Beyond Birth: Social Status in the Emergence of Modern Korea and coeditor of Contentious Kwangju: The May 18 Uprising in Korea’s Past and Present.
Loading...
or support indie stores by buying on